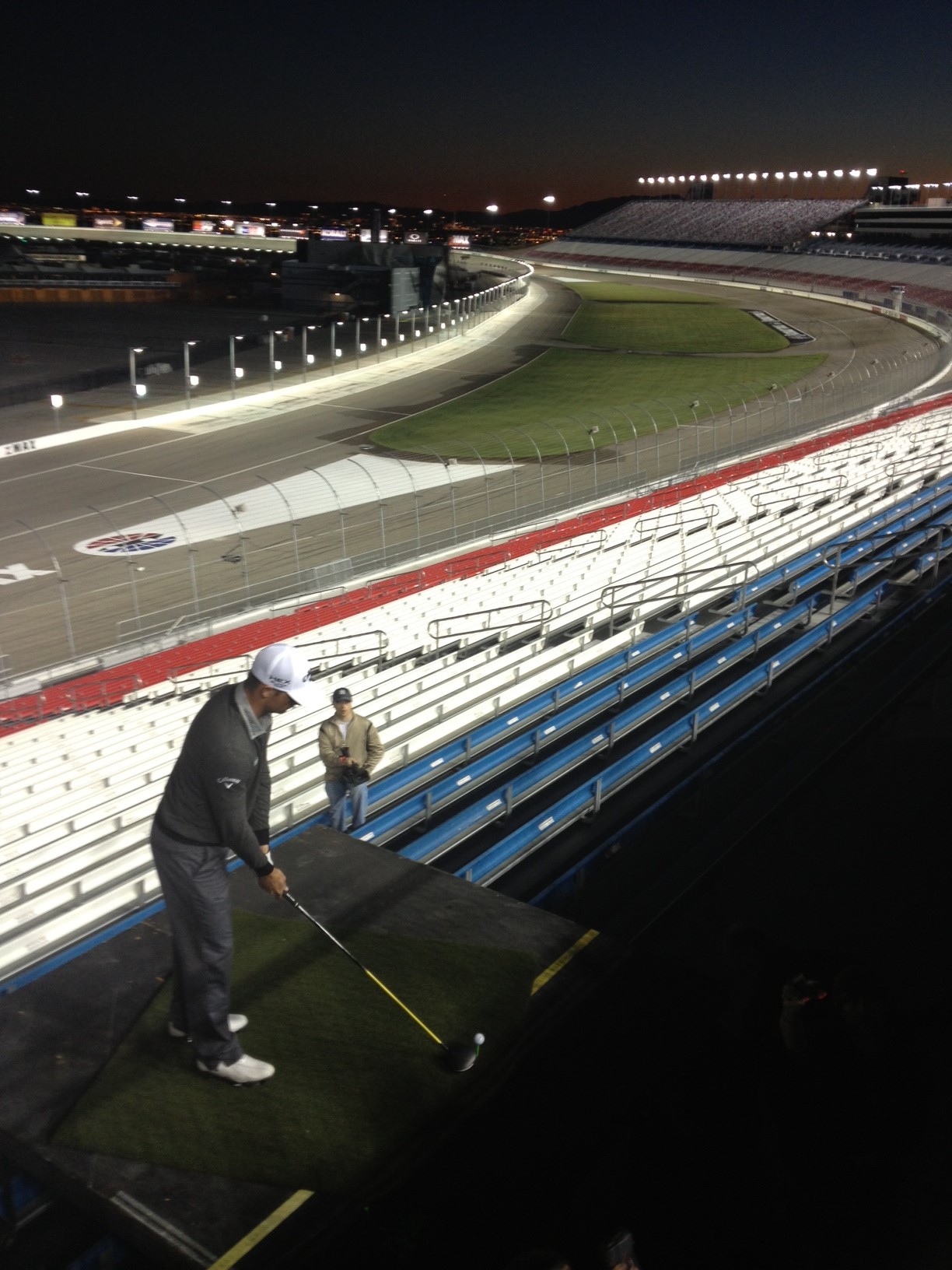 Las Vegas, Nevada (March 1, 2013)–It's a perfect February night in Las Vegas, and two of the biggest-hitting golfers in the world are gazing out at the infield of the Las Vegas Motor Speedway (three big boppers if you count Long Drivers of America visionary and former World Long Drive Champion Art Sellinger). The middle of the infield grass is about 350 yards away–it's about 430 or so to the end of the middle section–and the threesome is wondering where the first golf drive in the history of the Speedway (hit from an elevated tee located in the Dale Earhardt Terrace) will land. And it seems very appropriate that the golf intimidators are hitting from the area which was named after THE Intimidator. –By Brian Hurlburt

Jamie Sadlowksi, a two-time world champion, steps up and unleashes the first drive in the history of the place. The ball is pull-hooked and sails straight towards the scoring tower and infield pits. But for good reason. The practice mat on the makeshift teeing platform slipped underneath Sadlowski, causing the poor shot. After a few screws secure the surface, Sadlowski begins to go deep and down the middle with regularity, flying it about 370 yards on average, with a few going at least 380 yards.

Sadlowski's screamers land in the middle of what will be the grid of the RE/MAX World Long Drive Championship. The Finals on October 30 will feature the top eight qualifiers that will be determined during a September event in Mesquite, Nevada. The Finals will be televised live on Golf Channel and take place underneath the lights. A winner-take-all jackpot of $250,000 will be on the line.

"It's going to be a lot of different setting, but it’s going to be a good kind of different," says Sadlowski, who spent the earlier part of this day hitting drives down the Las Vegas Motor Speedway Drag Strip with current World Champion Ryan Winther. The two were filming promotional videos for Golf Channel. "It’s a way different atmosphere than what we are used to hitting to in Mesquite, which is basically a flat, football-field like grid with lines painted on it. Now we will be hitting from an elevated stage to the grid below which is a race track infield with the lights of Las Vegas as the backdrop. Hopefully it will spark our sport and grow it, and get more people to not only watch, but truly remember the Finals."

Sadlowski is also a fan of the new format which will award the biggest prize in the history of Long Drive competition to the champion. "It’s going to change how you train and prep for the event because that’s what it’s all about," says Sadlowski. "I like the winner-take-all aspect because everyone that comes down here, comes down for one reason, and now you have a chance to win an extra hundred thousand dollars. I don’t compete to win $10,000 for finishing third; I do this to win and be crowned the champion. And now you’re talking about a quarter-million dollars and that’s life-changing money. And I think just making the top eight will be big with Golf Channel taking over because that exposure will be very valuable because of the worldwide audience."

Sellinger, who grew up in Las Vegas, is thrilled with what will happen at the Las Vegas Motor Speedway. And after watching two of his stars take several dozen swings (Winther hit several 400 yard drives), he was even more sold on the choice of the new venue. But he and his team did decide to move the tee back for the competition to ensure golfers can hit it at least 465 yards without rolling out of the infield. "I think the setting is amazing for the RE/MAX World Long Drive Championship," says Sellinger. "It fits what the LDA is trying to do: Las Vegas breeds excitement and drama as well as a winner-take-all mentality. The Las Vegas Motor Spweedway will provide the ultimate stage for this. There will be fireworks, pressure, and the best hitter will come out on top."

THE Intimidator would be very proud that the "Country Club" has come to NASCAR.

"We've always said we have the most diverse motorsports facility in the world, and hosting the finals of the RE/MAX World Long Drive Championships further illustrates that claim," says LVMS president Chris Powell. "We've had a lot of events other than racing, but this will be our first golf event. We really appreciate Art Sellinger and his team adding a unique twist to this very popular event and hosting it here at Las Vegas Motor Speedway.” 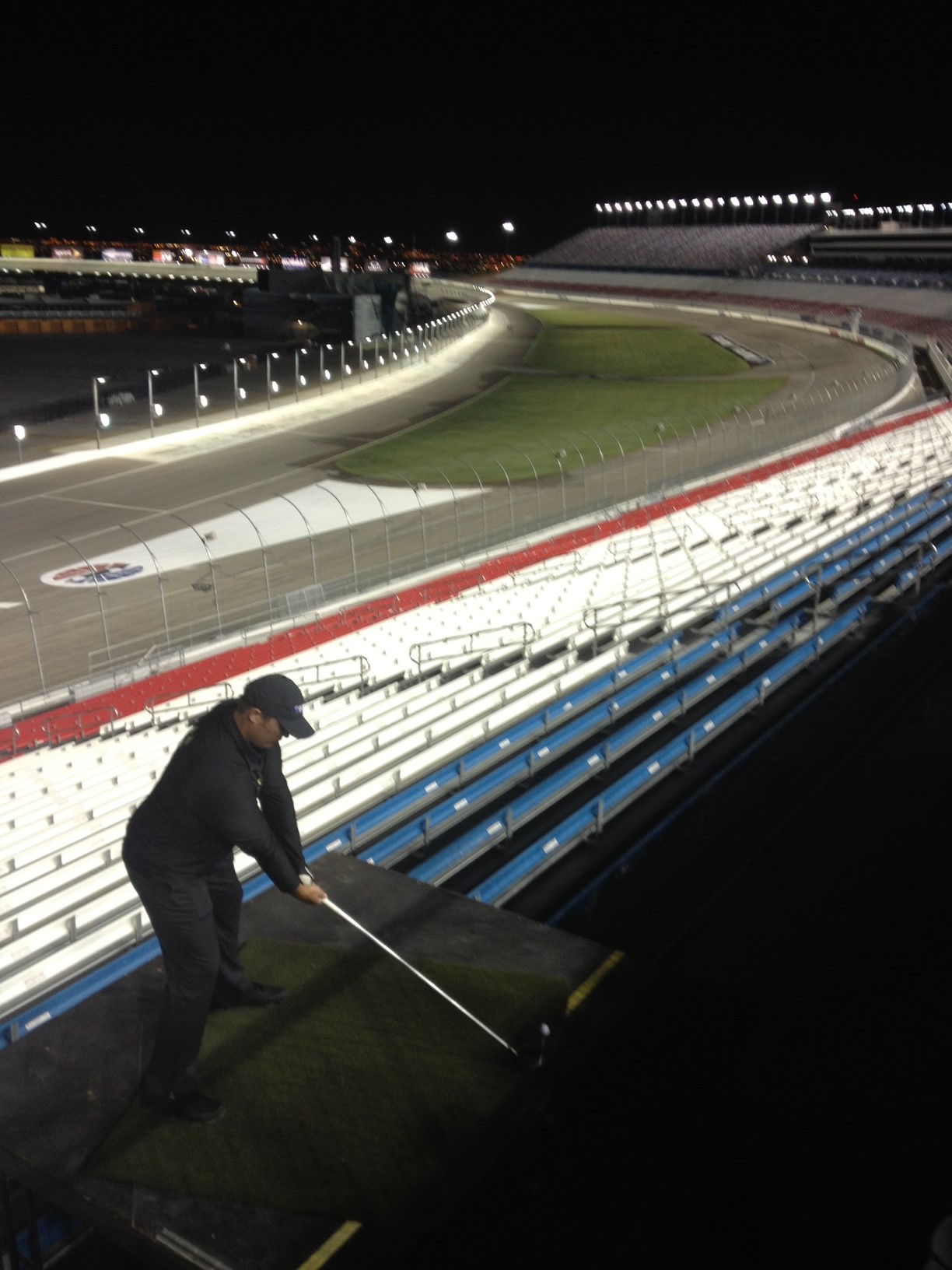