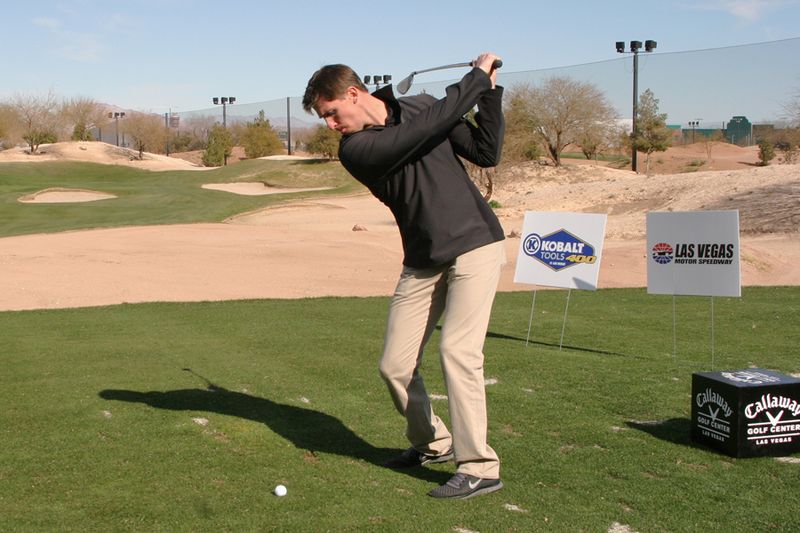 Las Vegas, Nevada (Updated March 5, 2013)–Arguably the city of Las Vegas' biggest weekend of the year is here, and one of the first places to celebrate the annual NASCAR race was the Callaway Golf Center. The Center, located at the south end of the Las Vegas Strip, was the site of a closest-to-the-hole contest a couple weeks ago which involved NASCAR racing great Denny Hamlin. Hamlin and the rest of the NASCAR racers descend on the city this week, culminated by the staging of the Kobalt Tools 400 at Las Vegas Motor Speedway. –By Brian Hurlburt

Hamlin sports about a 12 handicap and such friends as PGA Tour star and 2012 The Masters Champion Bubba Watson. He's a lefty with a solid swing and participates in various celebrity pro-am events throughout the year. The Las Vegas golf event was just part of a busy schedule for Hamlin while he was in town helping to promote the upcoming race. He fielded questions during an event at Lomie Heard Elementary School on the Nellis Air Force Base and also at a sponsor luncheon.

The Callaway Golf Center is a hub of golf in Las Vegas for both visitors and locals. The lighted facility features a two-tier driving range, 9-hole par 3 course, practice areas, a restaurant, a Callaway Golf performance shop, and other amenities. Click now to the official website of the Callaway Golf Center. Currently there is a Play All Day special in effect for just $25.

Hamlin predicts an exciting race in Las Vegas, and also that the new Generation 6 car will push cars to record speeds in Las Vegas. ““The manufacturers are excited," Hamlin said. "The drivers are excited about it. This is one of our most optimistic seasons. The cars are about 150 pounds lighter and are going to be faster. Look for speed records to be broken, especially at tracks that have been repaved over the past six or seven years.The track record at Las Vegas is probably going to fall. I always look forward to Las Vegas. It’s one of the best venues. You can see that with the ticket sales and the fans. That’s what makes it exciting for the drivers, to race in front of big crowds.”