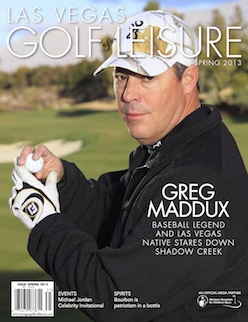 Las Vegas, Nevada (April 2, 2013)–For the third time, the Michael Jordan Celebrity Inviational is being played at Shadow Creek and hosted by the Aria April 4-7. Some of the biggest names in show business will be playing golf at the course, partying at the resort, and raising funds for various charities. Among the celebrities scheduled to play is Las Vegas Golf Region resident Greg Maddux in addition to Jordan himself. The public is invited to attend and kids under 16 are free. Click now for the official website of the Michael Jordan Celebrity Invitational (MJCI). –By Brian Hurlburt Follow @LVGolfInsider.

“It’s always fun, but it only gets competitive if you have a good partner,” says Maddux about the two-person team event of the MJCI. In 2012, Maddux was paired with actor/model Jesse Williams who wasn’t much of a golfer and they finished second to last. But Maddux’s main golf partner during his time with the Atlanta Braves, fellow pitcher John Smoltz, was paired with Team USA soccer superstar Brandi Chastain, a decent player, and the two won it all. In 2011, Maddux played with actor Andy Anderson and they finished fifth, two spots ahead of “Smoltzy” and his partner, Julius Erving. Jordan won the event in 2011 when he was paired with his former Chicago Bulls teammate Toni Kukoc. Maddux and Jordan have played golf together several times, but not in this tournament.

“There have been so many great moments,” says Jordan in comments from an email request for an interview which first ran in Las Vegas Golf and Leisure Magazine in an article written by this writer. “For me, the overall highlight has been Shadow Creek. It’s one of my absolute favorite golf courses and it’s been an honor to be able to share it with both the participants and the public. It’s truly beautiful and so challenging and there’s such a mystique about it. I’ve loved Shadow Creek since the first time I played it. The most gratifying thing for me is all we’ve been able to give back. I’m very proud that we’ve raised more than $6 million for some great charities, including this year’s beneficiaries, the Make-A-Wish Foundation, the James R. Jordan Foundation, Cats Care, the charity arm of my team, the Charlotte Bobcats, and Las Vegas’ own Opportunity Village.”

Shadow Creek is owned by MGM Resorts International which also owns Aria Las Vegas the AAA resort which is the center piece of CityCenter. Besides golf there are other fesitivities surrounding the event including special performances by John Legend and the Blue Man Group. Famed comedian and television personality Wayne Brady will emcee the evening.