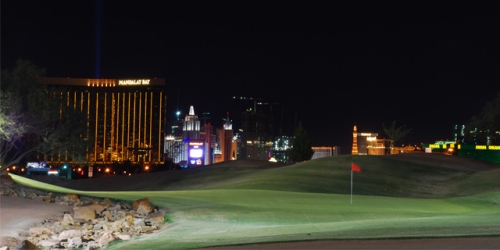 Las Vegas, Nevada (April 3, 2013)–There is a huge announcement coming for the Callaway Golf Center in Las Vegas. The very popular Center which features a lighted 9-hole course, two-tiered practice area, large clubhouse and pro shop, and a restaurant, will be undergoing millions in renovations and upgrades very soon. Plans are in the works, and word is that TaylorMade will be playing a major role in the new project and plans will be really moving and underway by June 1, 2013. –By Brian Hurlburt

No definitive plans have been released for the new incarnation of the Callaway Golf Center, but architects have been busy crafting plans. And the end result of the new project will result in something unlike anything in the world for TaylorMade, the creators of the popular R11 and R1 drivers in addition to the RocketBladez irons among other trend-setting products. But the word is that the end result will be a terrific experience for all golfers.

While the public announcements are forthcoming, officials from Callaway are aware of the new moves, and more details will soon follow. Annually, thousands of visiting and local golfers flock to the facility which is conveniently located on the south end of the Las Vegas Strip. The bright lights of the hotels are used as targets for golfers on the range or those playing a quick nine. Stick to GolfLasVegasNow.com for more details as they come available.