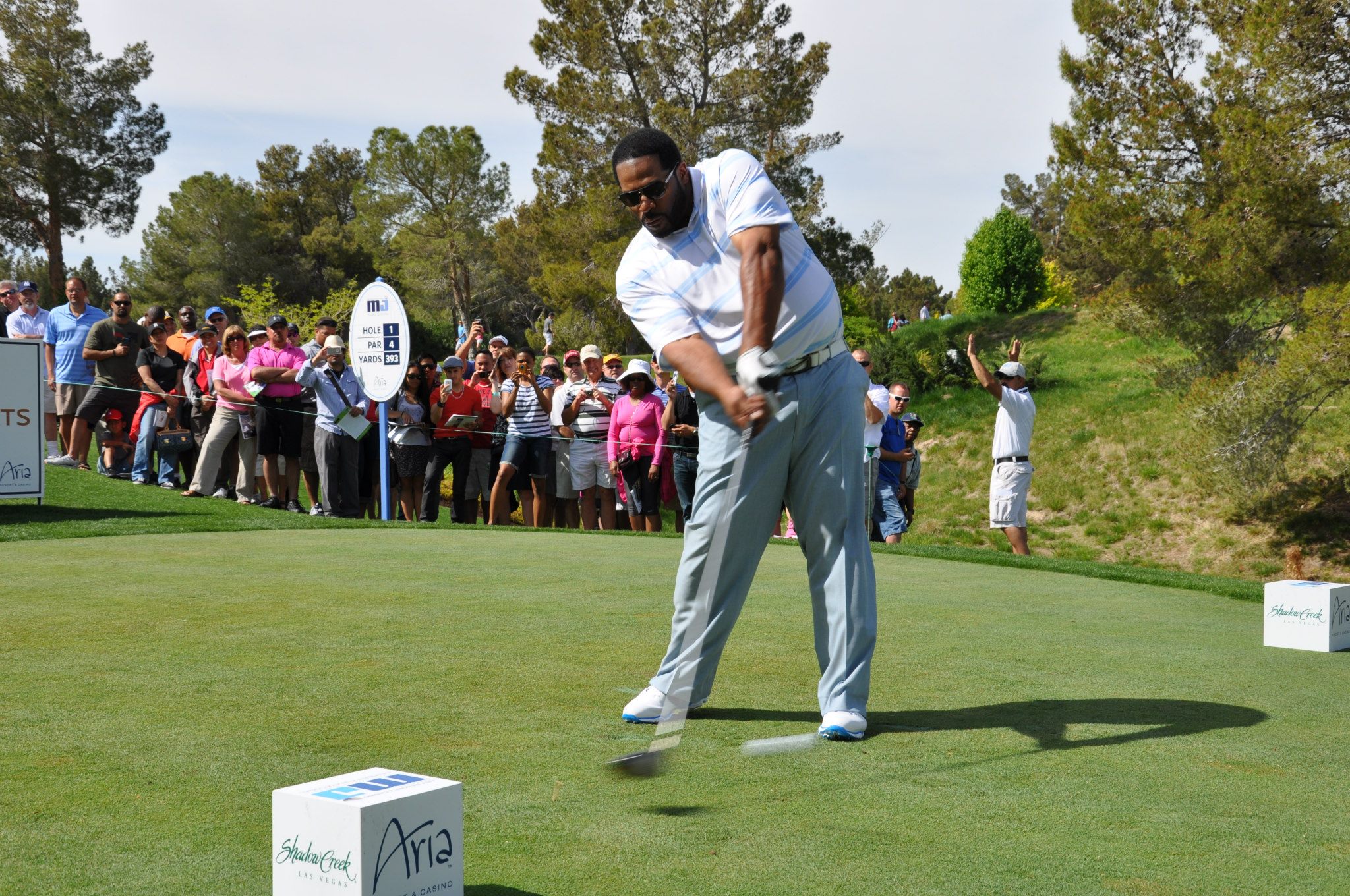 Las Vegas, Nevada (April 7, 2013)–The running joke for those fortunate enough to play Shadow Creek is that you never know who you will see on the course. And this week during the Michael Jordan Celebrity Invitational (MJCI) in Las Vegas some of the biggest names in sport and Hollywood are playing for a good cause including the likes of Will Smith, Wayne Gretzky, Greg Maddux, and former Super Bowl Champion Jerome Bettis, a bruising running back with the Pittsburgh Steelers. But it was a recent round at Shadow Creek that Bettis talked about following a practice session. –By Brian Hurlburt

“I have great memories of Shadow Creek but one stands out," says Bettis, who was known as "The Bus" during his playing days. "During one round, we heard Tiger Woods was out playing, and when we were on number seven, the long par 5, he caught us. We teed off and then he comes up and asked if he could play through. So he tees off and he crushes one but he hit a big fade that went in the trees, but he looked back at us and said, ‘I’ll still make birdie!' And we all busted up laughing, and we knew he probably he would. But the one thing my business manager said was that when the best player in the world hits one dead right, it’s OK and puts our games in perspective. It’s just a game that we love to play." For more MJCI, visit the official Aria LV Facebook Page.

At the MJCI, Bettis was paired with Roger Clemens in the celebrity competition, and the two teamed up for a one-under par score in the first round. The event is two rounds. First round leaders were Ken Griffey, Jr. and Brandi Chastain at -7. Chastain was looking for a repeat as she teamed with John Smoltz to win the event last year.

Bettis appreciated the opportunity to support a good cause andJordan. "There are two main reasons I am here," says Bettis. "Obviously Michael Jordan is a THE guy when you talk about sports and when he taps you on the shoulder to help him out and raise money,then that’s what its all about and you jump at the chance. The second thing is what he is doing with the Make-a-Wish Foundation. I have done things with them before, and everything he is doing with them makes it great and what this event is all about. And whenever I can lend my credibility and celebrity to a great cause, I am happy to do it."

Bettis also appreciates the opportunity to play Shadow Creek and the overall experience of the event which is hosted at the ARIA resort, the crown jewel of CityCenter. "The golf experience is second to none," says Bettis. "Shadow Creek is one of the best golf courses, I think, in the world. It is a hidden gem, and it’s one of those courses that if you get an opportunity to play it, you won’t regret it." Click now for first round scores and final round pairings.