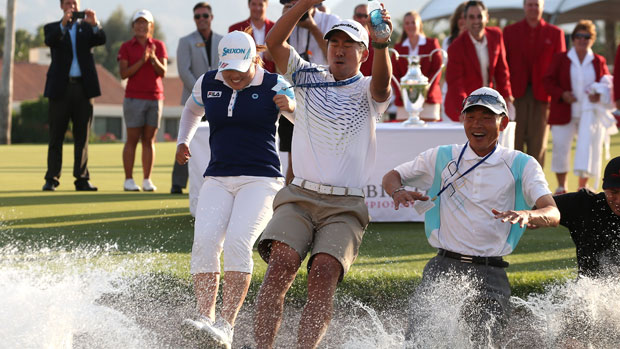 Las Vegas, Nevada (April 12, 2013)–Inbee Park won the Nevada State High School Golf Champion twice while attending Las Vegas' Bishop Gorman High School. And now she has claimed her second LPGA Tour major championship by winning the Kraft Nabisco Championship. She is the only golfer with strong ties to Las Vegas golf courses to have won a Major on a pro Tour. –By Brian Hurlburt.

Park recorded a 15-under par total at Mission Hill Country Club, winning by four shots and securing her spot as one of the best women golfers in the world, and continuing on her path of becoming one of the best to ever play. In 2008, she was the youngest player ever to win the United States Women's Open.

“It feels very good,” Park told the media following the Kraft event. “It has been a while since I won a major, and this is my second major of my career, and it feels very special.  This week I played very solid.  Today and all week I played very well.  I am just happy that I have another major under my belt. The first win in 2008, I was very young. I don't think felt that much pressure during the final round because I didn't know what I was doing. It just came to me as a gift. But this week I really felt nervous, and I knew what I was playing for.  I really handled myself well under pressure, so that's something I'm very proud of.” Quotes courtesy of ASAPSports.com. Photo: LPGA.com.