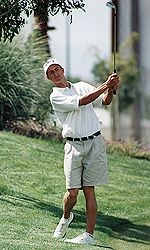 Las Vegas, Nevada (UPDATED April 15, 2013)–Adam Scott is the first former UNLV Rebel golfer in history to win a Major championship, and now joins Inbee Park as the only golfers with strong ties to the Las Vegas Golf Region to have won a Major. Scott won the 2013 Masters after outdueling Angel Cabrera in a two-hole playoff. Cabrera won the 2009 Masters in a playoff when he defeated former UNLV golfer Chad Campbell. Scott played one year at UNLV in 1998-99, finishing 11th at the 1999 NCAA Golf Championships. –By Brian Hurlburt.

"I would love it," UNLV Head Golf Coach Dwaine Knight said about the potential of Adam Scott winning The Masters as Scott was playing the final round. The comment came via text just after Knight's current Rebels completed an 11th-place finish at the Morris Williams Intercollegiate played at the University of Texas Golf Club. "He almost had it last year and it would be awesome if he could come back from that painful loss and win."

Awesome, indeed. Scott fired rounds of 69-72-69-69–279 to get into a playoff with Cabrera. His final round included an 18th-hole birdie that put him into the lead momentarily before Cabrera made a birdie of his own on 18 to force the playoff. The playoff ended on second hole (the 10th) when Scott made another birdie. "I found my way today," Scott was quoted as saying following the round. Scott also worked with Las Vegas resident Butch Harmon for many years.

Scott also became the first Australian to win The Masters. Scott was inspired to play the game by fellow Australian Greg Norman, who finished as the runner-up three times. Scott is very close to Norman and was looking forward to "sharing a beer" with him to talk about the win.

Scott turned professional following his freshman season at UNLV, but made his mark as a Rebel. He was named the WAC Conference golfer of the Week in late March of 1999. Coincidentally Scott earned the honor after competing as an individual in the Morris Williams Intercollegiate. He turned in the highest finish of his career finishing in a tie for fourth with a three round 216 (74-71-71). It marked the first time the Hope Island, Australia, native had finished in the top 35 in six tournaments that season. Scott's 216 finish was only three shots back of the individual champion.

Scott also was one of four Rebels to earn All-American recognition in 1999 joining Jeremy Anderson, Chris Berry, and Michael Kirk. Scott recorded a stroke average of 74.50 for the year and placed a team-best 11th at his first NCAA Championships last week.

"It was just great that everything fell into place for me, and I'm just so proud of myself and everyone around me who has helped me," Scott said via ASAPSports.com. "The list is so long, I can't do thank yous. But really incredible.  I'm a proud Australian and I hope this sits really well back at home. It's incredible. It's hard to exactly put it all together in my mind at the moment. It's a real honor, amazing." For more from Scott, click to official Adam Scott transcript.

News and Notes From Scott's Win: Adam Scott defeated Angel Cabrera with a birdie-3 on the second playoff hole (No. 10). Scott made a 12-foot birdie put on No. 10 after watching Angel Cabrera just miss his birdie putt.

Scott earns his ninth overall win and first major victory in his 202nd career start on the PGA TOUR at the age of 32 years, 8 months and 28 days.

Scott becomes the first Australian to win the Masters. A total of eight Australian’s have runner-up finishes at the Masters. International players have won the last three majors (2013 Masters/Adam Scott, 2012 PGA Championship/Rory McIlroy and 2012 British Open/Ernie Els). American’s have won 8 of the last 14 Masters dating to 2000.

Scott has made all five of his cuts on TOUR this season to go with three top 10s. Scott has finished in the top 15 in each of his last six starts in majors. Scott has nine wins on TOUR. Six of them came when holding the 54-hole lead and three were come-from-behind. He was one stroke behind Brandt Snedeker and Angel Cabrera entering the final round of the Masters.