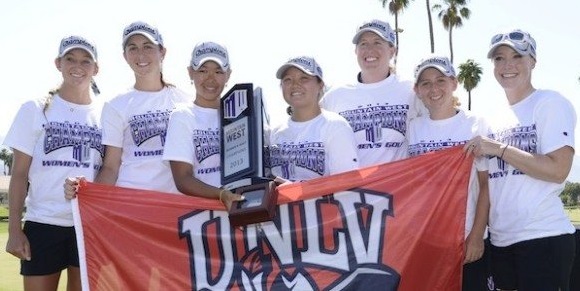 Las Vegas, Nevada (April 28, 2013)–The UNLV Women's Golf team won the Mountain West Conference championship this weekend, and then took the traditional victory plunge at the Dinah Shore Tournament Course at Mission Hills Country Club. Annually, the winner of the Kraft Nabsico LPGA Tour major jumps into the lake adjacent to the 18th green, and the Rebels followed suit after their big win. Additionally, UNLV Golf Coach Amy Bush, also a very active member of the Southern Nevada Chapter of the PGA of America, was named MWC Coach of the Year, UNLV sophomore Dana Finkelstein was named Player of the Year, and three other Rebels earned All-Conference recognition.Click now for an official photo gallery of the Championship.–By Brian Hurlburt Follow @LVGolfInsider

The team title was the fourth title for UNLV Women's Golf since the inception of the program in 1999. UNLV Junior Demi Mak lost in a playoff for the individual title to lead the Rebels. “Our thought going into the day was ‘let’s have fun and do this as a team,’" Head coach Amy Bush said. "We had one goal on our mind coming to California and that was to bring home some hardware, and we succeeded at that. It was tough tournament but the team fought and fought and really wanted this championship. It was really fun to watch. After our tough first round, it could have gone either way. But we talked as a team and came back in the second round and just wanted to have fun. The team came out and that was their goal for the day, and they did it and recorded a tournament low round. We had great individual rounds, with Mayko firing three under and Dana firing one under and Demi keeping the team atop the leaderboard. We then continued our momentum into the final round. I am really proud of our girls and it is really fun to be to be their coach.”

All of the Rebels finished in the top-25 as Dana Finkelstein finished tied for ninth at 12-over 228 (81-71-76), Katerina Prorokova tied for 13th at 16-over 232 (76-81-75) and Marguerite Swearingen finished 23rd at 21-over 237 (81-77-79). Finkelstein entered this week's Conference Championship ranked 57th by Golfstat and 75th according to the GolfWeek/Sagarin rankings, and was voted the conference's top player. She is the fifth Rebel to be named Player of the Year. The other Rebels earned All-Conference Second Team. They were Charlotte Brooks, Demi Mak, and Mayko Chwen Wang.

UNLV will now wait to compete in the NCAA Regional Championship on May 9-11.