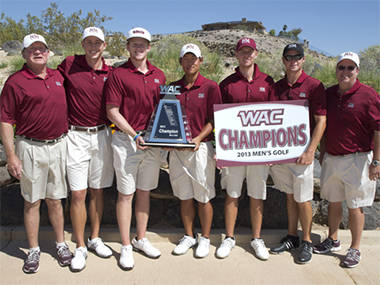 Las Vegas, Nevada (May 1, 2013)–Somebody should probably check the Rio Secco Golf Club records to determine if the New Mexico State Men's golf team lists this Las Vegas resort course as its home layout. The Aggies won their fourth WAC Club Glove Golf title in the last five years, with each of those events played at the Rees Jones course. The team recorded a 6-shot victory of University of Texas-Arlingtom. Paul McConnel of UTA was the individual champ. –By Brian Hurlburt, Follow @LVGolfInsider

"It feels amazing," said McConnel, who fired rounds of 71-78-69 over the three, wind-filled days. New Mexico State's Kennteh Fadke was second. The WAC Golf Championships have been played at Rio Secco since 2009, with the coaches, players and administrators enjoying the neutral layout. Rio Secco Vice President Eric Dutt, a member of the Las Vegas Golf Hall of Fame, is a proponent of amateur golf and believes it is important to host events such as the WAC tourney.

Also announced today were the all-WAC teams and top awards. San Jose State's Cody Blick was voted the WAC's Player of the Year and Freshman of the Year by the 10 head coaches. Coach of the Year honors went to Mike Dirks of New Mexico State.