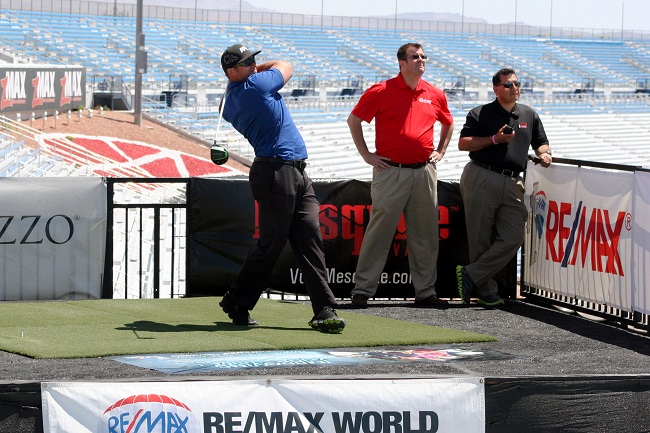 Las Vegas, Nevada (May 4, 2013)–Go big or go home. Put it this way: Ryan Winther, the 2012 RE/MAX World Long Drive champion, didn't go home. Winther was part of a group of special guests who christened the Las Vegas Motor Speedway as the new home of the Championship Finals, hitting exhibition golf drives of 410, 420, and 430 yards. The tee was located in the Dale Earnhardt grandstands with the landing area located in the race infield, where normally NASCAR champions are burning doughnuts after a race. Speed will definitely meet speed October 30 under the lights and live on Golf Channel to determine the King of Long Drive. –By Brian Hurlburt, follow @LVGolfInsider. Photo courtesy: Las Vegas Motor Speedway.

“We are going to a whole new level of excitement and competition, and a whole new level of just pure awesomeness,” said Winther, a few minutes after hitting from one of the most teeing areas in the world. “I am really excited to see this in October because it’s going to be perfect for the hitters and perfect for the fans. I am happy to be here and to see the growth of the sport, and it is going to be really fun at the Finals. The way I like to sum it up is that this is going to be awesome.” Callaway Golf XHOT team member Jeff Farley also crushed drives more than 375 yards during the event. The ceremonial drive was hit by LVMS President Chris Powell, who hit the grid with a solid drive fo about 275 yards.

The 2013 RE/MAX World Long Drive Championship Open Division Final Event will take place October 30, from 6-8 p.m. PST, under the lights at Las Vegas Motor Speedway. The teeing area is located in the grandstands about 40 feet above the LVMS grass infield which will serve as the 50-yard wide fairway. The Finals will be aired LIVE on Golf Channel with a winner-take-all prize of $250,000 earned by the last driver standing of the eight finalists. The Finals will feature the excitement of other major sports including fireworks, player introductions, music, smoke effects, and much more. The eight finalists will qualify in Mesquite, Nevada, September 18-27 at the Mesquite Sports and Event Complex.

Action in Mesquite will account for three of the four shows that will air on Golf Channel this October, which is being billed as Long Drive Month on Golf Channel. The four episodes profiling the RE/MAX Long Drive Championships are schedule to air across October for a combined 24 hours, as well as a documentary style hour-long special, which will air on NBC later in fourth quarter. Additionally, the long drive content will be featured on Golf Channel’s instructional series and news programs, including Morning Drive, golf channel’s daily morning show.