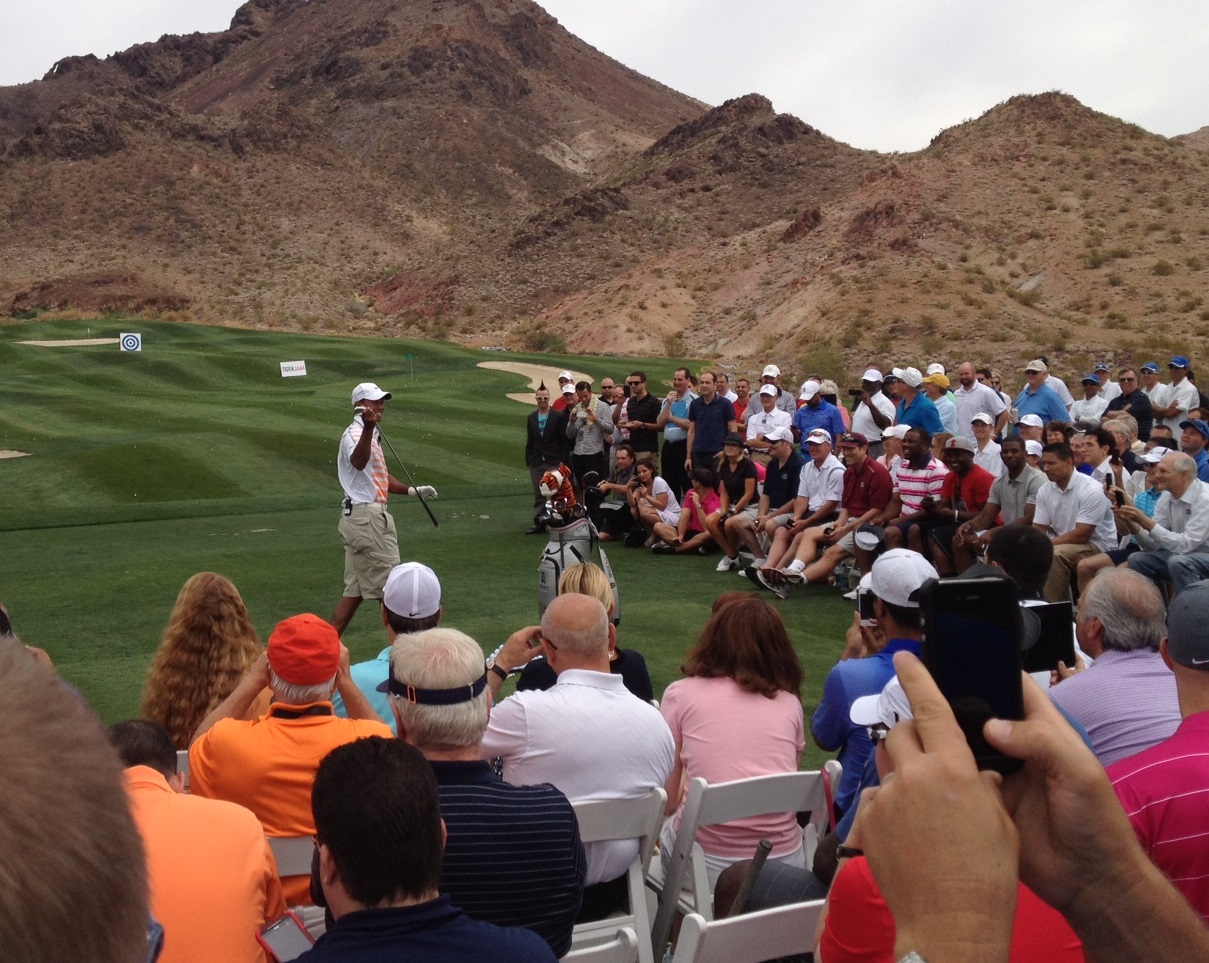 Las Vegas, Nevada (Updated May 21, 2013)–Tiger Woods was in the building, so to speak. The annual Tiger Jam, a major fundraiser for the Tiger Woods Foundation, was held in the Las Vegas Golf Region for the 14th time in 15 years. Woods held court at Cascata on Friday, May 17, during a clinic and question and answer session. He discussed a wide-ranging list of topics including Sergio Garcia, The Masters, his first win in Las Vegas, the swing changes he has undergone recently, stories about Sam Snead and Ben Hogan, and much more. This article will be the first in a series about the clinic that enticed a couple hundred people to come out in support of the Tiger Woods Foundation mission. —By Brian Hurlburt.

Woods was relaxed during the outing and began with his usual warm-up routine, taking questions in between–and sometimes during–swings. The first question was about his recent flap with Sergio Garcia at THE PLAYERS CHAMPIONSHIP which ended when Garcia sunk two balls in the water on the 17th hole after tieing Woods for the lead. Woods was asked what he thought about Garcia and his performance.

"Well, he finished in the top 10," Tiger deadpanned, drawing huge laughs from the crowd gathered on the range at Cascata. "I saw the replays of the shots (at 17), but I was on the 18th tee when it happened. I was up there getting ready to see the shot I wanted to hit and getting my shot picture. And obviously he's hitting. I'm getting my 5-wood out and kind of getting ready. And some guy yells out that Sergio hit it the ball in the water. Well, I'm not 100% sure whether he did or not because, as you know, the people on that hill have had a few libations. I don't know if they are telling the truth or not. You can't take that chance. So I went ahead and continued to get ready. And then they said he hit two in the water. Well, then you are skeptical whether that could be the case, But then a bunch of guys started saying that he did. I kept reminding myself that it doesn't matter what he did. I still have to execute my shot. I have to hit my draw. Put it down the right side of that fairway. Turn it down there so I have the option of making birdie. Because David (Lingmerth) still had a chance.

"And I didn't know he stuffed it on 17 but David still had a chance to win the tournament. I was only one ahead of him. I'm thinking, he can birdie the last two holes. Then I would have to birdie 18 or have the option to birdie 18 for a playoff so I had to stay focused on what I had to do. Then I absolutely tattood a 5-wood down there. That … was nice. I like it when I hit shots like that. You know, after all of the hard work. All of the prep. All the training. All of the lifting. It all comes down to the those moments when you have to call upon your body to hit a shot and execute it and pull off a shot when it absolutely matters. That is what is so satisfying. That shot on 18 was so nice to be able to turn it like that. Man, it felt really good. And I hit a nice 9-iron in there as well."

Cascata has become the annual home for the clinic in addition to a golf outing for sponsors. Among those playing this year was Los Angeles Clippers point guard Chris Paul, who sat front row during the clinic, enthralled with the greatness of Woods. Cascata is owned and operated by Caesars Entertainment and is open to all Las Vegas golfers. Click now for the official website for Cascata to reserve your Las Vegas tee times at this Rees Jones gem.

Woods also spoke about some of the keys to his recent success on the course. Woods is off to the quickest start of his professional career, and had won four PGA Tour events in his first seven events in 2013. He credited some "home course" cooking for helping him get off to such a terrific beginning to the season. And he threw in a playful jab about his infamous water wedge on 15 at this year's Masters, which, in reality, was a near perfect shot despite hitting the flag and going into the water. "It's been nice at home where I have a nice little practice facility where I can dial in all of my distances and wedges," said Tiger. "That's been probably one of the keys to why I have been scoring so much better. I have these clubs dialed in so much better … except for 15 at Augusta. I just had to hit it a half inch left or right and I would have been fine!"

Woods then dripped with sarcasm when he said, "Yeah, take dead aim at the flag … I'll never do that again!"

Woods also said the circumstances of the shot conjured up memories of some true golf legends: "It's the old Sam Snead/Ben Hogan story about how Snead said that he was informed one day that Hogan had hit his driver up the left side at Carnoustie, right down into a little neck of fairway. And he drove it into the same divot of his previous drive from the round before. And Snead said, 'Well, if he was that damn good he would've missed it left or right!"

Look for more from the Tiger Woods clinic in the coming days at your link to Las Vegas golf: GolfLasVegasNow.com.