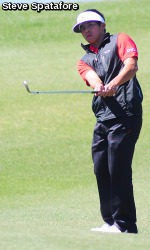 Las Vegas, Nevada (Updated June 1, 2013)–In 1998 when Dwaine Knight coached the UNLV Men's Golf team to the national title, Twitter, texting, and live internet scoring weren't even close to reality. But flash forward 15 or so years, and the technology is here to record huge moments in every facet of life. Such was the case during the third and final round of the NCAA Golf Championship qualifying to determine which eight teams would advance to the Match Play finals of the tournament. And when UNLV sophomore Kurt Kitayama dunked a 7-iron from 208 yards on his 18th hole to put his team into contention for the final spot, the online world buzzed. LIVE MATCH PLAY SCORING. UNLV lost to Georgia Tech, the #2 seed, 3-2 in the first round match play. Senior Kevin Penner lost on the 19th hole in the deciding match. –By Brian Hurlburt

UNLV Assistant Coach JC Deacon (@realjcdeacon) was quick to announce via Twitter that witnessing the shot by his young star was the "Single greatest moment of my Coaching career. My boy @Kurt_Kitayama makes a DEUCE from 208 on our last hole to keep us alive!!" He later tweeted: I can honestly say that was one of the best days of my life. This team will not go away!! "

But the drama wasn't over because the Rebels had to watch and wait while several teams finished their rounds to determine if their 3-day total of +2 as a team would be enough. After a few hours of watching live and hitting the refresh button on the live internet scoring, the Rebels found out that their tally was enough to earn a spot in a four-team playoff for the final three spots. The Rebels survived and entered the match play round as the seventh seed, facing Georgia Tech, the second seed, in the first round.

Kitiyama orchestrated arguably the most dramatic moment for Rebel golf since Chris Berry got up and down on the 18th hole in 1998 to clinch the title, but the rest of his Rebel teammates stepped up during this year's final 18 to post the best team score of the day. UNLV posted an aggregate -8 to jump from 21st place to the tie for the final spot. Only seven of the 30 teams recorded under-par rounds on the day. Kitayama tweeted the following following his dramatic shot and round: "By far the most intense day of golf with @realjcdeacon @AJ_McInerney @kpenner8 @carljonsonUNLV and nico. off to match play! #deuce."

For the tournament, the Rebels were led by UNLV senior Kevin Penner, this year's Mountain West individual champion, who finished in a tie for second individually. Penner shot under par in each of his three rounds this week with scores of 69-67-68. His final-round 2-under consisted of three birdies and a bogey.

Kitayama finished tied for 32nd at even-par, but his final round was UNLV's best of the day as he turned in a 3-under 67. In addition to his eagle, he had three birdies and a bogey. Fellow sophomore Carl Jonson tied for 93rd at 6-over after a final-round 1-under, while freshman AJ McInerney tied for 109 at 8-over. But his final-round 2-under par was a big factor in the Rebel surge. Junior Nicholas Maruri tied for 128th at 10-over after a final-round 3-over. McInerny was exchanging texts with his former high school, Coronado's Joe Sawaia, when Kitayama's eagle landed. "He didn't have a lot of hope but then he texted about the eagle, and he thought there was a chance after that," Sawaia said. McInerny helpded lead Coronado to three-straight Nevada State titles while at Coronado.

The 2013 NCAA Championship is UNLV’s 18th all-time appearance. The Rebels won the national title in 1998 in Albuquerque, N.M., and its previous best finish at the event was a second-place showing in 1996. Out of its 18 appearances at the national finals, the Rebels have now recorded 10 top-eight finishes. UNLV also boasts two individual national champions – Ryan Moore in 2004 and Warren Schutte in 1991.