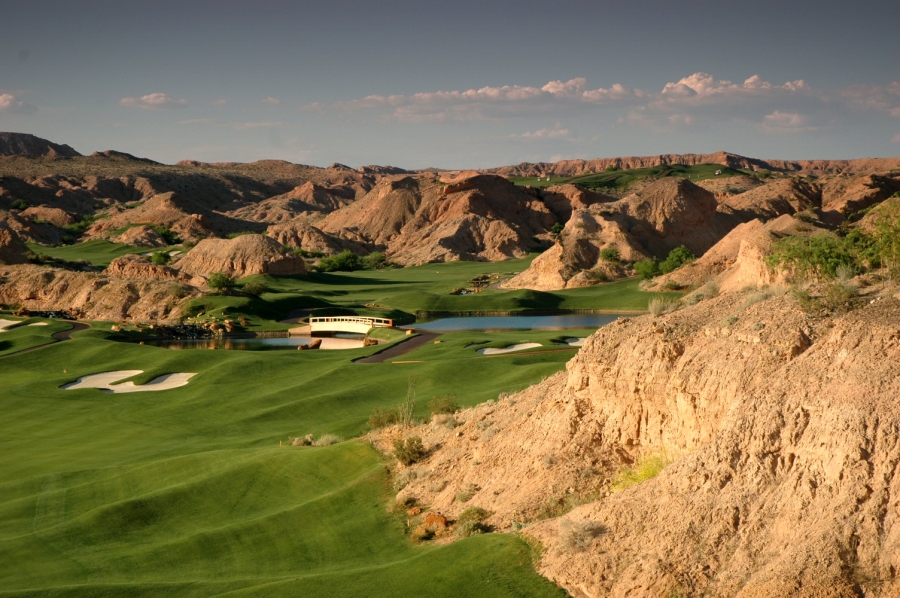 Las Vegas, Nevada (June 22, 2013)–The Summer is upon us, and one of the best Mesquite golf deals is available at Wolf Creek Golf Club and Falcon Ridge Golf Club. Running from July 1 – September 1, 2013, golfers can play as much golf as they want at these two Mesquite golf courses for only $99 Sunday through Thursday. If golfers wish to play Wolf Creek only over the two days, the rate is just $120. Call Wolf Creek Golf Club at (866) 252.4653 to secure your special Mesquite tee times deal. Mesquite is a part of the Las Vegas Golf Region and located 77 miles north of Las Vegas. —By Brian Hurlburt

Wolf Creek is annually ranked in Top 100 lists for the United States, and also won the Fan's Choice contest on GolfDigest.com in 2011, becoming the favorite course in America as voted by Facebook fans.

The beauty of Wolf Creek is created through contrast of golf course green and the native Nevada desert terrain. Canyons, lakes, desert, views and more combine to create a golf experience possibly unlike any in the world. But words only do so much. Click now to veiw the official Wolf Creek Golf Club Photo Gallery. Photos are worth a thousand golf shots… And if you want some more Wolf Creek Golf Club information check out our official Wolf Creek course page. You can also click now for official Falcon Ridge Golf Club information.

The Wall Street Journal also named this Mesquite Golf Course as among its 10 best in the world as part of a recent Fabulous Fairways article on the 10 best places to play golf in the world. The editors wrote the following about the course: "The topography is surreal, so take your camera as well as your clubs. Golf at Wolf Creek is an exciting roller-coaster ride over and through the dramatic Mesquite canyons, just one hour from Las Vegas. If the wind is blowing you can say goodbye to a good score; yardages are difficult to gauge, and wayward shots will not be forgiven. They'll rebound off rocks or vanish into cavernous ravines. Expect awe-inspiring 360 degree views, plenty of elevation changes, and lush green fairways that contrast vividly with the surrounding red rock mountains, steep cliffs and rocky ravines."