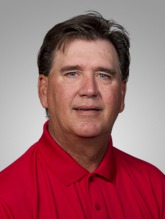 Las Vegas, Nevada (July 13, 2013)–Twitter is a beautiful thing. It allows people a chance to capture the emotions of a particular moment of an athlete, good or bad. Such was the case with a tweet from Las Vegas Champions PGA Tour pro John Riegger after a roller coaster round of 69 during the second round of the U.S. Senior Open in Omaha. "What a day today only can happen at an open championship," tweeted Riegger from his @teamriegger Twitter feed a little while after posting nine-hole scores of 30-39 en route to the 69. The sense of exasperation with a touch humor was evident in the tweet. Entering the weekend, Riegger was in a tie for 19th. LIVE SCORING. –By Brian Hurlburt, Follow @LVGolfInsider

"It was a Jekyll and Hyde day," Riegger told the media following the round which was just his second event of his Champions Tour career. "I got off to a quick start." Riegger secured a spot on the Champions Tour via Q School but that event was several months ago. He had to wait until his birthday–June 13–to be eligible for tournaments. He then qualified for the U.S. Senior Open as well.

"Chicago was my first week out (on the Champions Tour) so the excitement kind of wore off from the qualifying tournament," said Riegger, who finished tied for 26th in the Encompass Championship in Chicago. "I qualified, and got the last fully exempt spot, but the excitement kind of wore off after about three months, and then it was like, well, are we ever going to get to play?"

Riegger wasn't the only pro with strong ties to golf courses in Las Vegas playing in the Senior Open. Jay Don Blake, who has family in Las Vegas but lives in nearby St. George, Utah, was in the field and shared the lead in the first round. He struggled to a second round 74 and fell back in the pack after day two.

And Vic Wilk, a former champion on the Nike Tour, opened with a 3-over 73 but followed up with a 5-over 75 in round two and missed the cut. Wilk is a teaching pro at the Butch Harmon School of Golf. He also qualified for the Senior Open in 2011 when he made the cut. Wilk has a reputation as one of the top teachers in Las Vegas and his teaching allows little time to hone his own game. Quotes courtesy ASAPSports.com.