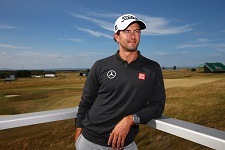 Las Vegas, Nevada (July 16, 2013)–Anthony Bennett, who played basketball at UNLV as a freshman, was recently the first pick in the NBA draft. If the PGA Tour had a draft, Adam Scott would have probably been the first pick in 1999 after playing for a year at UNLV. Flash forward to this year and Scott, the former Las Vegas golfer, is a mulitple PGA Tour champion and winner of the 2013 Masters. This week he makes the trip to The Open Championship with his famous Green Jacket that he earned with his Masters title. "I still don’t go more than two or three days without wearing it,” said Scott prior to The Open. “I don’t need an excuse to put it on. I have wanted that jacket my whole life, so why not wear it every day? I will definitely have the jacket out this week because my mum is coming up to the Open and she has not seen it yet." –By Brian Hurlburt, Follow @LVGolfInsider

Scott, who is a brand ambassador for Mercedes Benz, returns to The Open Championship a year after the biggest disappointment of his career. Scott seemingly had the Claret Jug in his hands in 2012 but four closing bogeys ended his hopes. He lost to Ernie Els by one. For sure, the loss still hurts but winning at The Masters this year took some of the edge off that fateful finish.

“If it had turned out I never won a major, perhaps I would have eventually had a relapse and never got over the 2012 Open, but I believed I was going to win and lose more majors," said Scott, a native of Australia. "That is just what happens when you are in contention. All the greatest golfers have lost majors, but they were in contention enough so that they won them too. This is just the start for me in the majors; there have been two majors so far that I have been really close to winning, and now I have won one. I am going to keep putting myself in those positions, and hopefully the ratio will balance out a bit more."

Scott’s final preparations might include picking the brains of his friend, and Open Championship nemesis Els, who is not only the defending Open champion but also the winner the last time the Open was played out over the Muirfield links, in 2002. The two golfers played a practice round together at Muirfield in the build-up to the 2002 Open.

“When I played with Ernie in 2002, he flat-out told me he was playing horrible,” recalls Scott. “Ernie said he didn’t know what he was doing, he didn’t know where his game was, and that he was at his wit’s end, and he played horribly in our practice round together too. I remember thinking that he had no chance. Sure enough, he ended up winning the tournament. I think I might pick Ernie’s brain because, well, I think he owes me one.” Quotes courtesy Juniper Sports/Mercedes Benz press release. Photo: Getty.