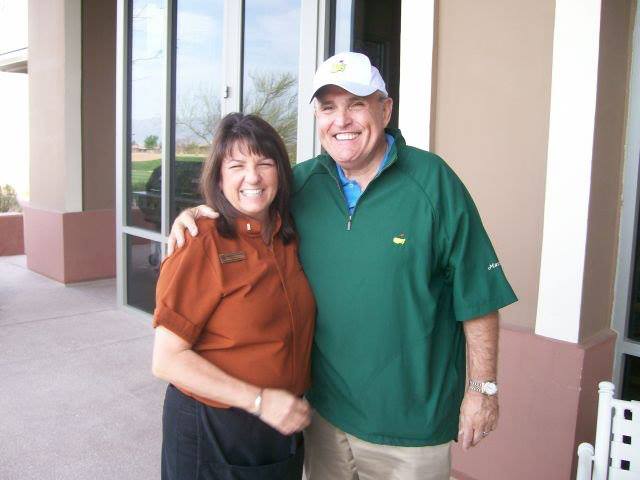 Las Vegas, Nevada (August 23, 2013)–Las Vegas resort golf course TPC Las Vegas is known as the home of pro golf in Las Vegas because it's a former host course for events on the PGA Tour and Champions Tour. And also because it's the home away from home for Tour golf pros who live in the Las Vegas Golf Region. Several play and practice at the course during off weeks and the off season. But it's also a place where athletes and celebrities play golf while in Las Vegas. Recently, former New York City Mayor Rudy Giuliani was sighted playing the course. And great news is you can play and enjoy TPC Las Vegas as well. Click now to reserve your official Las Vegas golf tee times or Las Vegas golf vacation packages at the official website of TPC Las Vegas. –By Brian Hurlburt, Follow @LVGolfInsider.

Some of the PGA Tour pros who play and practice at TPC Las Vegas include Dean Wilson, Alex Cejka, Ryan Moore, Charley Hoffman, Bill Lunde, Alex Prugh, Craig Barlow and several others. On display In the clubhouse are several Tour golf bags from the pros. And for through October, TPC Las Vegas is the home of the mobile touchscreen kiosk of the Las Vegas Golf Hall of Fame which features a look back at the history of golf in Las Vegas. And TPC Las Vegas features a "Walk of Fame" with photos and other memorabilia from Tour golf tournaments played in Las Vegas dating back to the 1953 Tournament of Champions.

TPC Las Vegas features some of the most intriguing golf vacation packages availble for the area. The hotel and resort partners include the JW Marriott Resort and Spa (located minutes from the course), in addition to other golf packages experiences which include Aria, Bellagio, and The Mirage, among others. Click now for the official Las Vegas golf vacations page at TPC Las Vegas.

About the course from TPC.com/LasVegas: Tournament Players Club Las Vegas is “desert elegance” on display. From the stunning backdrop of Red Rock Canyon to the rugged natural landscape, TPC Las Vegas golf course (formerly known as TPC Canyons) offers a test to the most seasoned of golfers. This is the premier PGA TOUR property in Las Vegas making it a destination for celebrities and PGA TOUR players alike. It’s no wonder the golf course has been heralded byGolf Digest as one of the “Best Places to Play.

The Bobby Weed and Raymond Floyd design is a par 71, 7,063-yard golf course that will test your skills while dazzle you with views of the surrounding mountains, canyons and the famed Las Vegas skyline. Your shotmaking ability is put to the test early in your round on the par-3 second hole (appropriately named “Canyon”). You will need to carry your tee shot almost 200 yards from the tips to an island-like green in the middle of the desert.