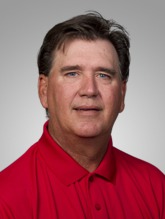 Las Vegas, Nevada (August 26, 2013)–John Riegger and Adam Scott became the latest pros with strong ties to the Las Vegas Golf Region to earn victories on a major Tour. Riegger, who has lived in Henderson, a Vegas suburb, for many years, won the Champions PGA Tour Boeing Classic while Adam Scott, who played college golf at UNLV, won the first leg of the 2013 FedEx Cup Playoffs at The Barclays. Earlier this year, Scott became the first male player with ties to Vegas to win a major (Masters), but for Riegger, it was by far the biggest win of his career. –By Brian Hurlburt, Follow @LVGolfInsider.

"This is going to go down as the best win of my career," Riegger, a two-time champion on what is now the Web.com Tour, told PGATour.com. "It's been a long, crazy career. I've been around the world and had a little success on the PGA TOUR, European Tour, Web.com, but my game has actually gotten better the last couple years. … I was just trying to play my game, do what I was capable of doing, play the smart percentage and that's what I did all day long." Riegger closed

With his victory, Scott jumped from 11th to 2nd in the FedEx Cup standings, trailing only Tiger Woods, who finished in second at The Barlcays after his birdie effort on 18 to force a playoff stopped just short of the hole. Scott is also stating a case to earn PGA Tour Player of the Year as he has two tins and six top 10 finishes on the season.

Scott also jumped up the Barclays leaderboard during the final round with a round of 66, coming from 12th place at the start of the day to win. "I can't believe it to be honest," Scott told PGATour.com "I just played a good round today and I came in and really didn't think it had a chance.  But obviously things went my way a lot out there, and so happy. But just quickly, I've got to say, this win is for a new member of my family. Olivia was born yesterday, so a big shout‑out to my sister and her husband, Brad, who is actually my coach, too. I'm thinking of you guys."