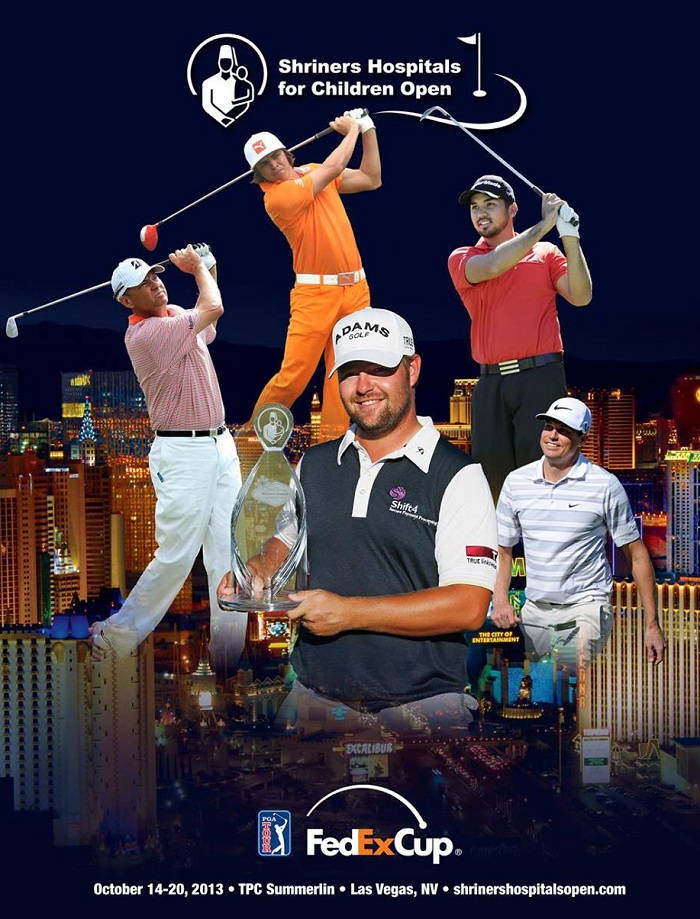 Las Vegas, Nevada (September 5, 2013)–It's customary to throw a big party to celebrate a momentous occasion. Well, the Shriners Hospitals for Children Open officially becoming a PGA Tour FedEx Cup Points Event is that occasion. And the party will be on October 12-20 at TPC Summerlin. In addition to the PGA Tour action, there are almost too many other events taking place in and around the tournament to count including a Rock and Roll wine and craft beer tasting with a major hole-in-one contest, concerts, the Las Vegas Golf Hall of Fame Night of Induction, the Charley Hoffman Foundation Pro-Am, Kick Off Your Heels Women's Day, a brand new The Hill hospitality area, and much, much more. And, oh yeah, former UNLV Rebel All-American Ryan Moore will be back to defend his 2012 title. Click for the complete Shriners Hospitals for Children Open event schedule. –By Brian Hurlburt, Follow @LVGolfInsider.

"We've got a lot of stuff going on this year, and we're very excited about the FedExCup," says Tournament Director Adam Sperling. "We are very thankful for the community support over the last five years.  it can't be overstated what the growth that we've seen from an attendance and sponsorship standpoint has meant to the Shriners Hospital for Children when they were deciding to continue their support and keep this event in Las Vegas. Plans have been in place for over a year now for this special week in October. We,again, have a number of events that have become pillars of our tournament week over the past couple years, and a number of new events, as well. There are enough that we had to put a Power Point together so I didn't forget anything."

Of special interest to the PGA Tour golf fans who will come to TPC Summerlin for the golf  action are the new concerts, events, and seating areas that will make being a part of the action even more special. "New this year is the inaugural Hill Concert Series," says Sperling. "We've upgraded and renovated The Hill interior. For the first time we will have after‑play entertainment on The Hill on Friday and Saturday evening immediately following play. Headlining both nights will be a band called the Dirty Guv'nahs. They played Bonnaroo a couple times, and they've got a great sound. We think it's a really inclusive sound for everybody attending. And Jared Lee and the Jeremy Cornwell Project will be opening on both nights. With the entertainment we're also partnering with Rock & Roll Wines and our partners a Coors Light Miller‑Coors for a craft brew and wine tasting event. There will be 27 holes of white, red wines, and nine craft brews under the Miller‑Coors label that we think will provide a nice alternative for spectators and sponsors, and possibly players, for after‑play activity."

During the Hill Concert Series, 10 random golfers wil be chosen to hit a shot on the hisoric par 3, 17th hole which is adjacent to The Hill. "On Friday and Saturday evening during the concert series, we'll have the Shot At Glory," says Sperling. "That is in honor of Jonathan Byrd's historic hole‑in‑one to win on 17 in a playoff a couple years ago. We are lighting up the 17th hole, and a hole‑in‑one will win a new Hyundai. We'll also have prizes for closest to the pin."

There will also be a double-decker seating area that will allow for superb viewing of the 16th and 17th holes. The area is designed to create an atmosphere similar to the par 3, 16th hole at the FBR Open in Phoenix which has become golf's biggest party. Also back again is the MGM Resorts International Pro-Am on wednesday. Party on …