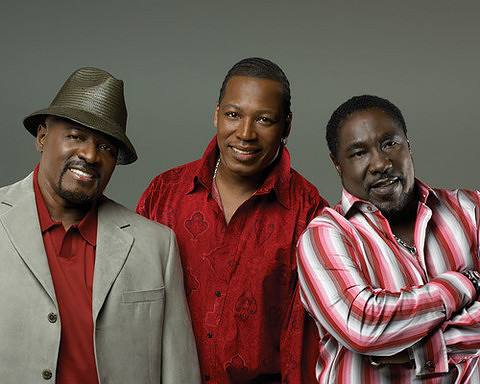 Las Vegas, Nevada (September 18, 2013)–The O'Jays have recorded 24 Top 10 hits and 59 total songs which have hit the charts in a career that dates back to Cleveland, Ohio, in the fifties. But the group–these days made up of original founders Eddie Levert, Sr. and Walter Williams, Sr., in addition to longtime third member Eric Nolan Grant–is still going strong. And part of their efforts include The O'Jays Scholarship Foundation which is the beneficiary of their annual celebrity weekend in Las Vegas October 25-27, 2013. Highlighting the weekend will be a benefit concert hosted by Earvin "Magic" Johnson and a golf event at the historic Las Vegas National Golf Club. Click now for more O'Jays Celebrity Weekend details (also click to listen to Love Train …). –By Brian Hurlburt, Like on Facebook.

Stevie Wonder headlines the concert which will feature other special guests. A masquerade ball hosted by Danny Blakewell and appearances by Mike Epps, Shirley Murdock, and the Zapp Band kicks off the weekend on Friday, October 25. Tickets to the parties, concert and golf are still available. Click to the official O'Jays Foundation website to get involved.

The golf tournament is Sunday, October 27, at Las Vegas National. The course is the former host course for events on the PGA Tour and LPGA Tour. In 1996, it was one of three courses used in the rotation of the Las Vegas Invitational when Tiger Woods won his first PGA Tour event. National is also the home of the Las Vegas Golf Hall of Fame. Can't make the O'Jays event, click now to reserve your tee times at this historic resort course for another day.

Steve Perry, President/CEO of the Pro Football Hall of Fame is the guest speaker, and scholarship award winners will be recognized immediately followed the golf event. Since their 2005 induction into the Rock and Roll Hall of Fame, Levert and Williams have returned to their hometown of Canton, Ohio, to help inspire and motivate students.

Now the current version of The O'Jays that includes Grant are giving back to the community where Eddie and Walter began singing as students themselves. The O'Jays Scholarship Foundation awards not only traditional high school and college students, but also non-traditional (adult) students – unlike any other scholarship program of this type in the country.

The title sponsors of the celebrity weekend is Chrysler and the United Auto Workers Union. Raffle tickets are available to be purchased for a chance to win a Chrysler 300 which will be given away during the weekend. You need not be present to win.