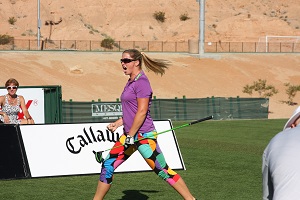 Mesquite, Nevada (September 24, 2013)–Six RE/MAX World Long Drive Championship winners were determined in Mesquite, Nevada, on Saturday, September 21. Among them, a new ladies champ. two Long Drivers of America Hall of Famers, and a former NBA Superstar. Now the focus shifts to qualifying for the October Eight who will then square off at Las Vegas Motor Speedway for a winner-takes-all prize of $250,000 on October 30 and live on Golf Channel. Tickets free here.–By Brian Hurlburt, Like on Facebook.

“What an amazing day at the championship grid in Mesquite, Nevada, and it, again, lived up to our motto, Live Long,” said Long Drivers of America Owner Art Sellinger. “Each of the finals had their own special moments, and each champion survived some of the most grueling and competitive qualifying rounds in history. To earn a RE/MAX World Long Drive Championship ring is the ultimate in the sport of Long Drive, and each winner stepped up to the challenge. With Stephen Kennedy earning the senior title it proves the international power of the event.”

Long Drivers of America is a dynamic golf event company that specializes in producing long drive events for professionals. The company is owned and operated by long drive pioneer Art Sellinger.  Founded in 1995 and based in Roanoke, Tex., LDA is best known for staging the annual RE/MAX World Long Drive Championship, the premier event in power golf. The event has evolved into an international competition with power golfers from across the globe. The RE/MAX World Long Drive Championship Premieres October 9 at 9:00 PM EST and will be featured throughout long drive month on Golf Channel. For more information visit www.longdrivers.com.Follow @LongDriversUSA