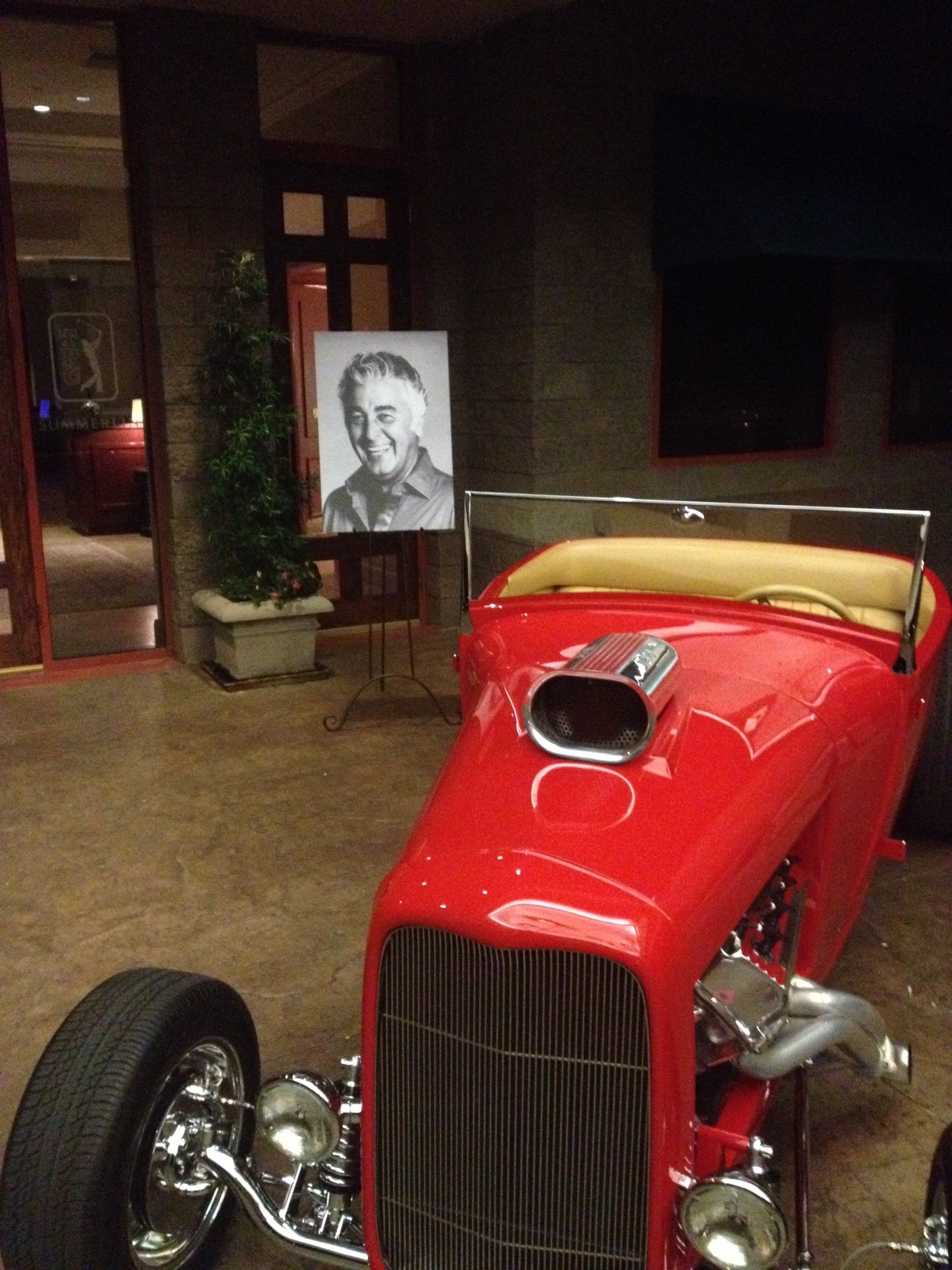 Las Vegas, Nevada (October 12, 2013)–Voss Boreta is credited with revolutionizing the golf retail mail-order business in the seventies and at one time operated more than 70 Las Vegas Discount Golf and Tennis franchises around the country. On October 1, Las Vegas and the golf industry as a whole lost a true icon when Voss died at the age of 79. He was still active in the golf business overseeing two Las Vegas Golf and Tennis locations in Las Vegas plus the very popular TaylorMade Golf Experience (formerly the Callaway Golf Center). Many of the who's who of Las Vegas attended a memorial service in his honor October 10 at TPC Summerlin. –By Brian Hurlburt, like on Facebook.

“Everyone who played golf in Las Vegas knew Voss and liked him,” says Jack Sheehan, a writer who wrote two bestsellers with Peter Jacobsen and who was also featured in Las Vegas Golf and Tennis commercials. “He looked like a movie star, one who might have been pals in an earlier time with Bugsy Siegel or George Raft, and he always had a big smile and the attitude that he was going to give his customers a great deal. In this town he was like Cher or Liberace or Elvis. When you said Voss, everyone knew who you were talking about.”

While Voss was huge in Las Vegas, he was also known as a golf industry pioneer and a very shrewd operator. He got started in business in San Francisco where he operated nightclubs before being enticed by the bright lights of Las Vegas. After breaking his own 7-iron during a Vegas golf outing he discovered there was nobody in the city, at the time, who could fix it. He sent it to a friend in San Francisco and after hearing the story, the friend encouraged Voss to open a golf store.

He opened the original Las Vegas Discount Golf and Tennis location at Tropicana and Paradise in 1974 and grossed about $275,000 in the first year. A strong local following, the store's location near the airport, and his willingness to take a gamble on the golf mail-order business combined to turn his little store into a national brand.

''We put a little ad in Golf Digest that people had to call with their own dime,'' Boreta told AP Golf writer Tim Dahlberg in 1989. ''When they called, we told them we'd send them a catalog when we didn't even have one put together yet. But the next thing you know, here comes a couple of orders in.''

Voss was off and running and capitalized on the golf boom which coincided with national golf manufacturers creating "game improvement" clubs such as the Callaway Big Bertha and others. Voss and his stores sold a ton and his opinion held major sway with industry icons. Voss sold his national stores in 1995 but kept the Vegas locations. Over the years two of his sons, Ron and John, joined him in the golf business and in recent years Ron has taken over day-to-day operations with assistance from John.

This writer had the occasion to work with Voss for many years and saw first hand his marketing and business prowess in additiion to his tough demeanor. During the inaugural Golf Fest Vegas show at The Orleans Arena in 2004, Voss and his longtime manager, Bill Stauffer, created the Las Vegas Golf and Tennis Experience on the show floor and were both skeptical about the success of the first-year venture. When the doors opened, hundreds of golfers flooded in making a bee-line for LV Golf and Tennis merchandise, most holding the yellow bags that the store has become famous for. Thousands upon thousands upon thousands of the bags have been donated to local charity events over the last several decades.

"I will never forget his eyes lighting up when those doors opened," remembers Stauffer, who still works at the Dean Martin and Tropicana location which is a TaylorMade Golf SuperStore. "He just said, 'Bill, would you look at all of those yellow bags!' People just kept coming in and coming in with them. But that was typical Voss. He always got excited, even as big has his businesses were, when grass-roots marketing like that was successful. It was in his blood."

Voss worked the floor for the entire weekend and always kept his eye on everything including suggesting to show organizers (which included this writer) that they should put the PGA Tour golf tournament on the big screen (we did, and Voss was right on the money to make the suggestion). And he also voiced his displeasure about another booth where competitors were selling cheap used golf balls which was against the rules. Again, Voss was correct and the violators were told to cease and desist. But that was typical Voss who wouldn't be taken advantage of by anybody.

Most recently Voss and his sons entered into an agreement with TaylorMade Golf to re-brand and renovate the Callaway Golf Center as the TaylorMade Golf Experience. At the time of his passing, the renovations were underway but he was involved in the planning for the new Experience which is said will be a "game-changer" when construction is completed.

“Maybe using the words ‘bucket list’ to describe it is a bit exaggerated, but our goal is to create an experience that golfers believe they must see when they visit Las Vegas, or must visit often if they are a local,” says Brad Holder, director of retail marketing for TaylorMade. “As a company, we are always looking for innovative and cool ways to engage our customers, and that is why we have entered into this partnership with the Boreta Family. This will be a total experience for the golfer from visiting the retail area to hitting balls to playing nine holes to grabbing something to eat. We will make sure every component blends together well and creates an unforgettable experience for golfers.”

In recent days, business has been usual at the two Las Vegas Golf and Tennis locations and the TaylorMade Golf Experience (it is open during renovations). But life in Vegas golf without "Voss" will never quite be the same. "My Dad hated funerals, and told me after every one that we ever attended, 'I don't want any part of that,'" says his son, Ron. "All he wanted was for his friends to get together, tell some stories, and have some drinks. And he wanted to make sure I picked up the check and gave the bartenders a big toke. That's the kind of guy he was. A regular guy who loved life and lived it to the fullest."

Some of the frends who gathered for cocktails and stories in the TPC Summerlin clubhouse included 2013 Las Vegas Golf Hall of Fame inductees Ray Norvell and Bob May in addition to previous inductees Jerry Roberts (along with his wife, Barb), Brady Exber, and Sheehan. Among the others attending were legendary Vegas golfer Gil Cohen, golf industry reps Ryan Judkins (Callaway) and Gene Graham (Ping), TaylorMade SuperStore Manager Fred Nepa, Director of Marketing/Buyer Jackie Jacquemoud, longtime gaming veteran Sandee Cruden, and many others. Ron Boreta also said that hundreds of calls had come in over the last several days,each with a story about how his father had made a postive impact on the person's life.

Voss is survived by his loving partner, Araceli; his three sons; four grandchildren; and great-grandchildren.