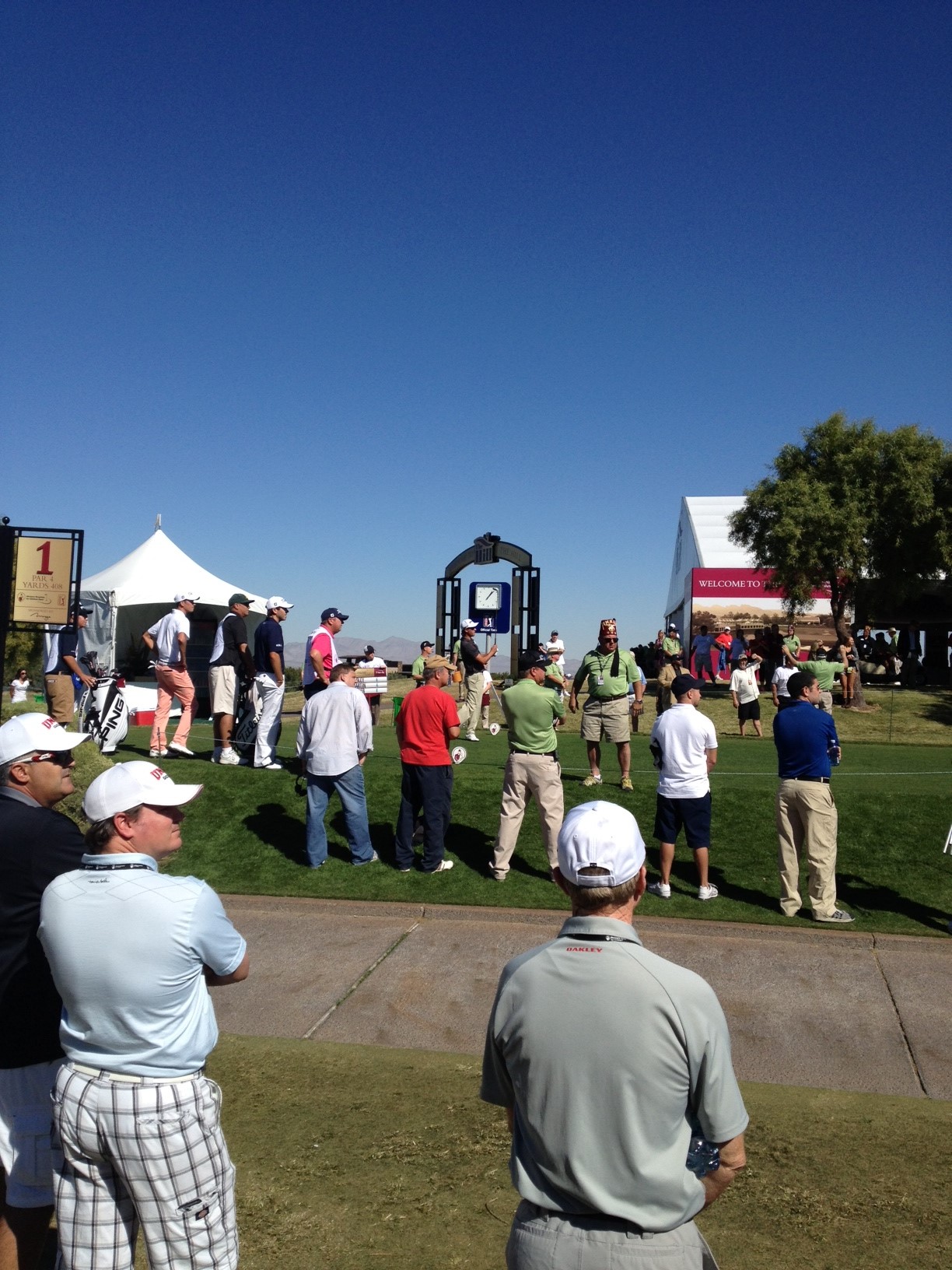 Las Vegas, Nevada (October 18, 2013)–J.J. Henry broke the TPC Summerlin course record during round one of Las Vegas' PGA Tour event, the Shriners Hospitals for Children Open. He recorded nine birdies and an eagle en route to a 60, a year after Las Vegas Golf Region resident Ryan Moore recorded a 61 on the way to the 2012 Vegas title. It was the first 60 in Vegas since Tommy Armour III–who grew up in the city–fired the score at The Las Vegas Country Club in 1999. It was the 29th round of 60 in PGA Tour history. Read on for more about his magical round and news and notes from the Shriners. —By Brian Hurlburt, Like on Facebook.

"It was just kind of one of those days," said Henry about his career-best score on the PGA Tour. " … I finally made some putts. I've always felt like I've been a pretty good ball striker, and when I make some putts, I seem to climb the board. I obviously hit a lot of good ones today and hit some close ones, but it was nice to make a couple of those, especially that last one for eagle on 9, my 18th hole."

Henry recorded a 28 on the front nine holes at TPC Summerlin (his back nine). The low numbers caused him to pause while writing it down. "I've never written down a 28 on the front nine,' said Henry, who asked others in the scoring trailer to confirm his score. "I want to make sure I'm doing it right."

More News and Notes from the Shriners Hospitals for Children Open:

Charley Hoffman, who held his Foundation benefit event on Sunday and Monday, was paired with two other former Rebels in the first round, Bill Lunde and Chad Campbell. Hoffman opened with a 66 and was low player in the group: "We have seven rebels in the field, which is pretty great. That's what Coach Knight has done for this town and for our golf game. I mean, he's recruited great players to come play here, and it pays off. We have three playing together, and seven is definitely good."

Another former Rebel, Ryan Moore, who is also the defending champion, got off to a slower start than he would have liked with an opening round of two-under par 69: "It was just one of those days, it was beautiful. Really couldn't have a nicer day, except it was a little chilly this morning. But no wind, and this golf course is definitely very scorable and the scores are showing that. But you know, I just never got any great momentum, just kind of kept hitting wedges and 9‑irons to 18 feet, 20 feet, 25 feet. And you know, it was one of those days if I could have just got one of those to drop and maybe get a little positive momentum, it might have turned things around. I just kept burning edges, and overall, couple under, not going to kill me. Obviously I know what I gotta do from here."

Recent UNLV graduate Kevin Penner is playing on a sponsor's exemption courtesy of the Shriners tournament management. He teed off in the last group of the day and was welcomed to the tee by former All-American Jeremy Anderson, UNLV Head Coach Dwaine Knight, former assistant coach Andy Bischel, current assistant coach J.C. Deacon, and several other supporters. He turned in a round of even par 71.

Jonathan Byrd was back at the scene of his historic walk-off ace during a playoff of the 2010 Vegas event. But, surprisingly, the hole-in-one that won the playoff (the only time in PGA Tour history a tournament was won with an ace) isn't among his most memorable moments of that week: "It's funny, but for some reason it's sometimes the last thing I think about because I think about some par putts I made and some other birdie putts I made to stay in the playoff."

A total of 11 players with deep Vegas ties are in the Shriners Hospitals For Children Open field, led by the contingent of seven UNLV Rebel golfers. The rebels are: Derek Ernst, Hoffman, Lunde, Andres Gonzales, Campbell, Ryan Moore, and Kevin Penner. The other four players in the field who live in Vegas are native Scott Piercy and residents Kevin Na (2011 champ), Alex Prugh and Nick Watney.