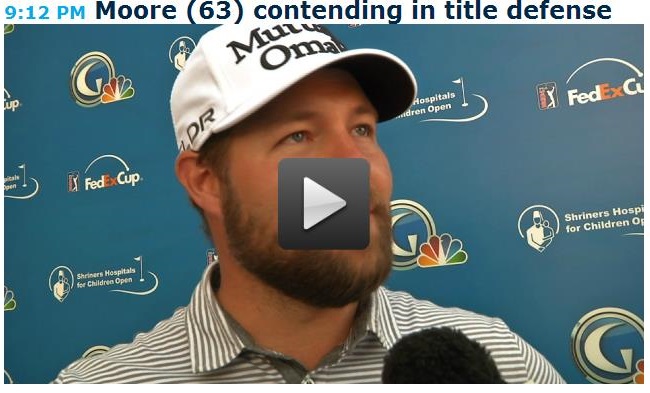 Las Vegas, Nevada (October 19, 2013)–Ryan Moore was a 4-time All-American at UNLV and won the 2004 NCAA title. He moved away from Las Vegas for a brief stint a few years ago, but is now back living in the area and says the Shriners Hospitals for Children Open "is a fifth major" on his importance scale. Moore recorded a 24-under par total in 2012 to win the event and following a 63 in round two in 2013, he is back in contention to become the first repeat winner since Jim Furyk in 1998 and 1999. Moore is being trailed by a large contingent of family and friends this week, just as he was last year when he became the first former Rebel to win Vegas' PGA Tour event. –By Brian Hurlburt, Like on Facebook.

"We had everybody out last year, and everybody came back out again this year," said Moore following his second round, and admitting he secured 50 – 60 tickets for the Moore contingent. "It was great to have a lot of cheers out there, and I am just having a fun week."

Moore also leads a contingent of seven former Rebels in the event. The other Rebels included Charley Hoffman and Bill Lunde (members of the 1998 team that won the NCAA title), Derek Ernst (who won on the PGA Tour last season as a rookie), Chad Campbell (a multiple PGA Tour champion), Kevin Penner (making his PGA Tour debut as a professional), and Andres Gonzales (a former champion on the Web.com Tour).

Moore opened with a run-of-the-mill two-under par 69 in the first round and knew his work was cut out for him if he wanted to be in the mix for the title. Especially after JJ Henry went out and broke the course record (Moore shared it at 61) with an 11-under par 60 in round one. Watch Moore's interview after round two below.

"My goal was to get in contention," said Moore about his thoughts entering round two. "After I made four birdies in a row on the front, I kind of got a little momentum, then my sights turned to, all right, let's see what we can do with this. Let's try and get, like I said, close to double digits or in double digits, at least be within striking distance."

Moore will play the weekend along with three other Rebels, Hoffman, Campbell, and Penner who each made the cut. Moore has had a whirlwind year which included winning his hometown event, welcoming a baby boy just following the tournament last year, and being inducted into the Las Vegas Golf Hall of Fame.