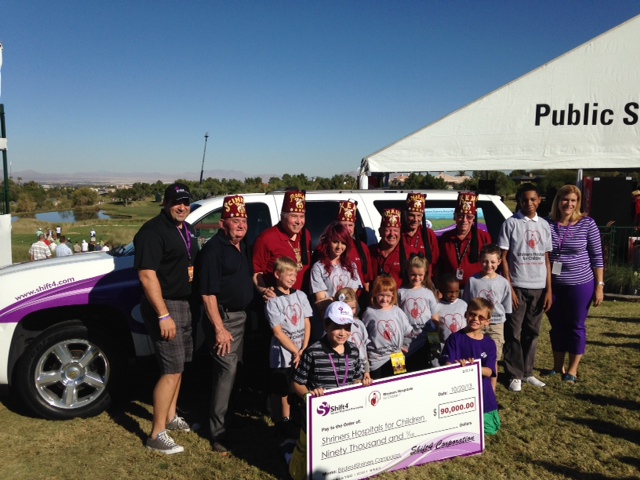 Las Vegas, Nevada (October 21, 2013)–From a pure golf standpoint, Vegas golf fans are probably bummed that a Las Vegas Golf Region resident didn't win the PGA Tour's Shriners Hospitals for Children Open for a third-straight time. The streak is over at two after Kevin Na (2011) and Ryan Moore (2012) went back-to-back, but even without claiming the trophy, the PGA Tour pros who call Las Vegas home still made a difference at the tournament. Plus the local pros felt a new vibe with FedExCup points on the line and say the tournament is on the right track. "I think the field was the best it's been since I've played out here for sure, and it's nice to see the people come support the Las Vegas community, and hopefully we'll get bigger and better every year," said Charley Hoffman, the area's top pro after a fourth-place finish. –By Brian Hurlburt, Like on Facebook.

Hoffman was also one of the Vegas pros giving back as much as he received during the week. Hoffman, along with his wife, Stacy, held the annual Charley Hoffman Foundation Pro-Am on Monday of tournament week. The Foundation holds events in San Diego and Las Vegas, and to date has raised more than $1 million for charities including Goodie Two Shoes, the Juvenile Diabetes Foundation, and the Cystic Fibrosis Foundation. The 2013 event in Las Vegas featured golf at TPC Summerlin, a clinic with Hoffman, plus a private event at ARIA Las Vegas on the Sunday of tournament week.

"I intentionally take the week before off  to get ready for the Pro‑Am and all that stuff," said Hoffman. "Obviously it's a relief once the Pro‑Am and foundation stuff is done. It's nice to raise a bunch of money for the community and do that. But it's all business after that. This year I think I managed my time better than year's past. I think I overloaded a lot and this year I got everything done by Monday and took it easy, hung with the family and played some decent golf."

Locals Ryan Moore and Scott Piercy also continued a new tradition by helping to raise $90,000 for the Shriners Hospitals for Children. Moore and Piercy earned dollars for every birdie and eagle made during the season as part of the Birdies4Shriners campaign sponsored by Shift4 Corporation, a Las Vegas-based company. In 2012, the duo combined to help raise $75,000 for the Shriners via Birdies4Shriners. The 2013 check presentation was held on Sunday during the final round in the Shift4 Public Safety Appreciation Station where the company welcomed first responders from across the valley throughout the tournament.

"Whether someone is able to make a donation of 25 cents per shot or 25 dollars, it all adds up and it will make for an amazing, meaningful donation to Shriners Hospitals for Children," said Shift4 COO Kathy Oder earlier this season about the campaign. "Best of all, every penny donated goes directly to Shriners, an organization that does wonderful things for children who so desperately need its help."

Resident Nick Watney also got in on the act but with a more, under-the-rader gesture. PGATour.com contributor Fred Albers witnessed Nick Watney, another resident, making the day of a youngster just behind the 18th green. From Albers: "They handed out more than $6 million in prize money on Sunday, but 6-year-old Matthew Houston might have been the happiest person leaving the golf course. He has battled cerebral palsy and for the last three years received treatment at the Shriners Hospital in Los Angeles.Following his round, Las Vegas resident Nick Watney potted young Matthew on a hill behind the 18th green. Without prompting, Watney walked up that hill to say hello to Matthew and give him a souvenir ball and glove. The glow from Matthew’s smile produced enough energy to light every neon sign on the Vegas Strip."

In all there were 11 pros with ties to Las Vegas in the field, including seven who played college golf at UNLV. Las Vegas pros have a history of giving back to their community and this week was no different.