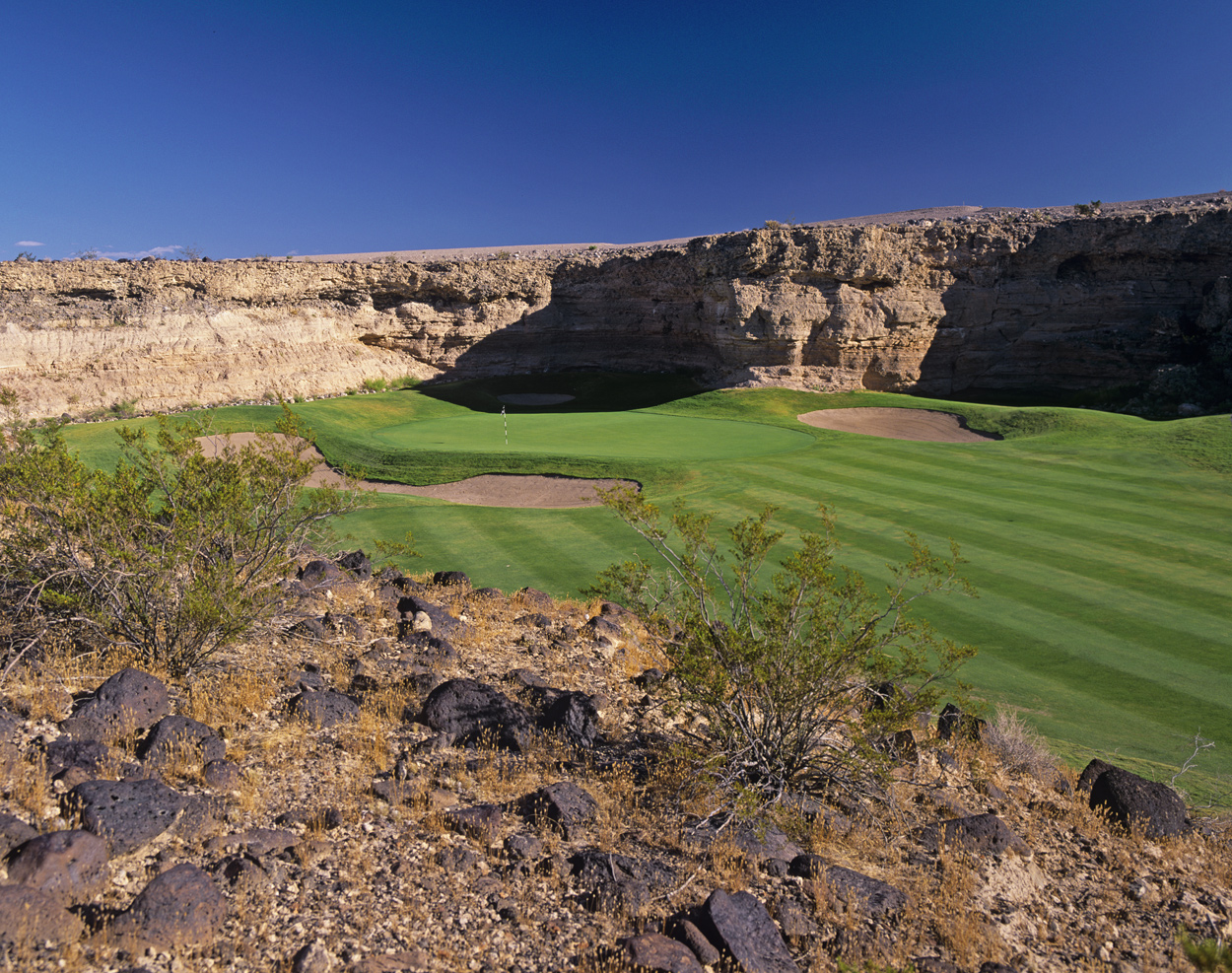 Las Vegas, Nevada (October 22, 2013)–The three-player team for the Champions PGA Tour at Rio Secco Golf Club is set for the Wendy's 3-Tour Challenge. The team was announced this week and is made up of Fred Funk, Bernhard Langer, and Kenny Perry. Each have played in the tournament before including Funk and Langer who were a part of the event in 2012. Now celebrating its 22nd anniversary, the Wendy’s 3Tour Challenge, benefiting adoption, is the only professional golf tournament that pits three players from the PGA TOUR, LPGA Tour and Champions Tour against each other in a head-to-head competition for tour bragging rights and a share of the $1 million purse. The event takes place November 12 and is free and open to the public. –By Brian Hurlburt, Like on Facebook

Rio Secco is the home of the event for the sixth year. Rio Secco is also home to the world famous T-Mates female caddies in addition to the Million Dollar Hole. The course is open to all golfers and is gracefully draped across 240 acres in the foothills of the Black Mountain Range and located 15 miles from the Las Vegas Strip, Rio Secco Golf Club is renowned for its world-class golf experience and acclaimed Butch Harmon School of Golf. The 7,318-yard, par 72 course was named in USA Today newspaper among the “Top Ten Golf Destinations in the World.” Offering instruction for newcomers and professionals alike, The Butch Harmon School of Golf is famed for working with such talents as Tiger Woods, Greg Norman, Ernie Els, Phil Mickelson, Stewart Cink, Dustin Johnson and Natalie Gulbis. Located in Henderson, Nevada, Rio Secco is a Caesars Entertainment golf destination. Other Caesars Entertainment golf courses are: Grand Bear, in Biloxi, Mississippi; The Links at Cottonwoods, in Tunica, Mississippi; the historic Atlantic City Country Club, in Atlantic City, New Jersey; Chariot Run, in Laconia, Indiana; and Cascata, in Boulder City, Nevada.

About Fred Funk: Fred is one of the most recognizable names and personalities in golf. He has recorded eight PGA TOUR and eight Champions Tour victories in a professional career that has spanned more than 30 years. His last TOUR win came in 2007 at the Mayakoba Golf Classic where he became the fifth oldest champion in PGA TOUR history, and the oldest since 1975. Funk was first eligible to participate on the Champions Tour in July of 2006 and that same month finished tied for 11th in his first event at the U.S. Senior Open. Three months and two starts later he recorded his first Champions Tour victory at the AT&T Championship. Funk is coming off a 2012 Champions Tour season in which he recorded two victories and finished fifth on the Charles Schwab Cup Points list. In 22 starts so far this year, Funk is currently ranked No. 15 in Charles Schwab Cup Points and No. 16 on the Champions Tour money list with more than $890,000 in earnings. Funk is ranked No. 2 in Driving Accuracy Percentage (79.25%) and has posted five top-10 finishes so far in 2013, including runner-up finishes at the Liberty Mutual Insurance Legends of Golf and U.S. Senior Open Championship. He has been a member of two Presidents Cup teams (2003 and 2005) and one Ryder Cup team (2004). This will be Funk’s fifth Wendy’s 3Tour Challenge appearance (2007, 2008, 2009 and 2012), all as a member of the Champions Tour team. His 2008 squad with Jay Haas and Nick Price recorded the sixth-career Wendy’s 3Tour victory for the Champions Tour.

About Bernhard Langer: He has been one of the most dominant players on the Champions Tour over the past six years. He recorded his first Champions Tour victory in 2007 in just his fourth career start at the Administaff Small Business Classic and has since won a staggering 17 times. His 18 career victories are more than any other player since October, 2007. In 2010, in route to his first Charles Schwab Cup title, Langer became the first Champions Tour player to win the Jack Nicklaus Trophy (Player of the Year) and Arnold Palmer Award (leading money-winner) three consecutive years. The German native hit a small speed bump in 2011 when he was sidelined from late March to mid June due to left-thumb surgery, only competing in 14 events that year. Langer returned fully healthy in 2012 and promptly  finished in a familiar spot atop the money list. In doing so he became the Champions Tour’s first four-time winner of the Arnold Palmer Award when he passed the $2-million mark for the fourth time in thelast five years. Langer has continued his winning ways in 2013. He is currently ranked No. 1 on the Champions Tour money list and in top-10 finishes with 16, including two victories. He has finished in the top-25 in all but one of his 22 starts so far this year. In addition, he is ranked No. 2 in Charles Schwab Cup points. Since turning professional in 1972, the World Golf Hall of Fame member has recorded 81 victories worldwide, including the 1985 and 1993 Masters Tournaments. Langer was a member of 10 European Ryder Cup teams between 1981 and 2002 before adding a captaincy to his resume in 2004 when he led the European team to victory at Oakland Hills. Langer will be competing in his third Wendy’s 3Tour Challenge this November at Rio Secco Golf Club in Henderson, Nevada.

About Kenny Perry: Kenny will be making his fourth appearance at the Wendy’s 3Tour Challenge; in 2008 he joined Stewart Cink and Rocco Mediate as a member of the PGA TOUR team and in 2010 made his Champions Tour debut at Rio Secco with Bernhard Langer and Nick Price. Perry made his third Wendy’s 3Tour appearance in 2011 in a winning effort with Jay Haas and Mark Calcavechia helping the Champions Tour claim their seventh Wendy’s 3Tour Challenge title. Also that same year Perry was named Champions Tour Rookie of the Year. So far in 2013 he is enjoying a banner year on the Champions Tour, with 10 top-10 finishes, including his third and fourth career victories in back-to-back events at the Constellation SENIOR PLAYERS Championship and U.S. Senior Open Championship. Perry is also ranked No. 1 in Charles Schwab Cup points to go with a No. 2 ranking on the Champions Tour money list. The Kentucky native and 14-time winner on the PGA TOUR has been a member of two Ryder Cup teams (2004 and 2008) and four Presidents Cup teams (1996, 2003, 2005, and 2009) during his more than 25 years as a professional. Perry, who continues to compete on the PGA TOUR, enjoyed a late surge of success on that circuit just prior to turning 50. In 2010 he recorded five top-20 finishes and his two victories in 2009 gave him his fourth career multi win season and second in a row after posting three first place finishes in 2008. Also in 2008 and 2009 Perry finished a career-high 5th on the PGA TOUR money list earning $4,663,794 (career high) and $4,445,562 respectively. Additionally, he made 53 straight cuts on the PGA TOUR from January 20, 2008 to March 21, 2010.