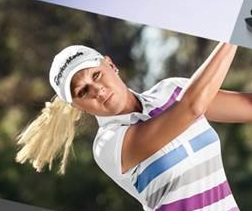 Las Vegas, Nevada (November 26, 2013)–Natalie Gulbis will be spending some of her Thanksgiving holiday welcoming fans at the grand opening of the TaylorMade Golf Experience store located at was formerly the Callaway Golf Center. TaylorMade executives and the Boreta family–owners of the Center in addition to the two Las Vegas Golf and Tennis locations in Las Vegas–have partnered to create a top-level retail golf experience and the LPGA Tour superstar and Las Vegas resident will be on hand on Black Friday to mark the opening. Gulbis is also known to show up unannounced at the Center for evening practice sessions, sometimes tweeting photos from the practice area. Also on hand will be demos of the new JetSpeed Woods from TaylorMade, the latest in driving and wood technology. –By Brian Hurlburt

The new clubs are scheduled to be officially released in December but those attending the opening of the TaylorMade Golf Experience will have the chance to be one of the first to see and test the clubs. Gulbis will pose for pictures, sign autographs, and be on hand for the meet and greet from 1-3 PM on Friday, November 29 at the Experience which is located at 6730 S. Las Vegas Boulevard.

“We are very excited to be expanding our long-running partnership with TaylorMade/adidas Golf," says Ron Boreta. "We have a long and positive history of working with TMAG and our Las Vegas Golf and Tennis stores that we anticipate will continue in this partnership at the Golf Center. The renovation efforts that have been undertaken are unprecedented in the golf industry. Our customers can expect great things."

Besides Gulbis and the debut of the JetSpeed clubs there will be giveaways, specials, and other surprises throughout the day. Gulbis is coming off of a pretty solid week on the LPGA Tour. She was leading heading into the 4th round of the Titleholders event but a tough final round ended her chances. Gulbis lives in Las Vegas and works with fellow resident Butch Harmon.

According to TaylorMade officials, JetSpeed, which is set to replace the existing RBZ Stage 2 woods in December, is the first driver that features the new Speed Pocket in the sole (TaylorMade added a Speed Pocket to the SLDR fairway woods).

With a shallower head and low, forward center of gravity (CG) — similar to the CG characteristics of SLDR — the combination gives JetSpeed a sweet spot that's 25 percent larger and extends lower on the face than RBZ Stage 2. It also helps increase ball speeds and reduce spin on shots hit low on the face.

"Amateurs have a tendency to miss the ball low on the club face with the driver," said Sean Toulon, TaylorMade's Executive VP. "We believe the introduction of the Speed Pocket, along with the lower, forward CG makes this a driver that crosses all party lines. It's breakthrough driver technology."

The TaylorMade Golf Experience is more more than 10,000 square feet, and renovations and updates have nearly doubled the retail space on property to more than 4,500 square feet. There are hitting bays to test clubs plus the expansive driving range and practice area will be open this weekend. The store will be stocked with all of TaylorMade, adidas Golf and Ashworth's golf equipment, apparel, footwear and accessories, and will offer golfers a high-end and high-tech retail experience.