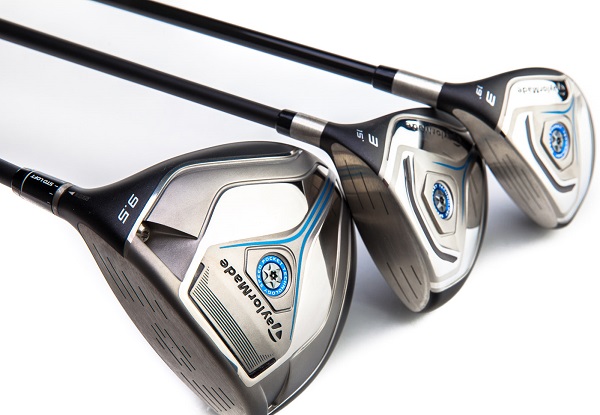 Las Vegas, Nevada (November 27, 2013)–Golf technology is updated seemingly on a daily basis. Obviously the companies invest in new tech to make a profit, but that research and development, hopefully, results in better clubs and better golf games for golfers. At TaylorMade, company officials believe the new line of JetSpeed drivers and fairway woods will deliver distance and better control for golfers. In fact, the new club is said to have a "25 percent larger sweet spot" than previous drivers. What that means, again hopefully, is both accuracy and distance off the tee. And that is a Thanksgiving wish all golfers can get behind. Visiting and local Las Vegas golfers can check out the new clubs at the grand opening of the TaylorMade Golf Experience on Black Friday. –By Brian Hurlburt.

“The JetSpeed driver represents the first time we have incorporated a Speed Pocket inside a driver,” Brian Bazzel, TaylorMade’s senior director of metalwood product creation, told Golfweek equipment writer David Dusek recently. “The reason why we did that, and really the benefit, is that it creates a larger sweet spot, lower in the face. In fact, the sweet spot is 25 percent larger.”

According to Dusek and TaylorMade officials, the following is the TaylorMade philosophy on their line of drivers: "TaylorMade did not design the JetSpeed to be as adjustable as the recently released SLDR. JetSpeed takes the place of the RocketBallz Stage 2, so TaylorMade is continuing its two-family philosophy regarding woods. The SLDR family was designed with tinkerers in mind (as the R1, R11 and R11S were before it), and the JetSpeed family was designed at a slightly lower price point with distance-craving players in mind (as RocketBallz Stage 2, RocketBallz and Burner were)."

TaylorMade, the No. 1 played driver brand on the PGA Tour,  officially announced the release of the JetSpeed in mid-November. The Club is "a breakthrough line of metalwoods that includes the company’s first driver to feature Speed Pocket technology. In addition, JetSpeed fairway woods and Rescue clubs combine an enhanced Speed Pocket, an extremely low-forward center of gravity (CG) location and extremely light overall weight to promote faster swing speed, clubhead speed and ball speed for more distance."
“We expect ‘low and forward CG’ to represent the next great innovation in metalwood performance,” said Sean Toulon, TaylorMade Executive Vice President. “With our SLDR and JetSpeed products, we’re giving golfers of all types the opportunity to increase their launch angle and reduce their spin-rate, which ultimately leads to more distance.”
The Speed Pocket was originally designed to increase the speed at which the clubface flexes and rebounds to promote faster ball speed.  Why put a Speed Pocket in a driver, since the face is already as fast as the USGA will allow? TaylorMade engineers discovered that incorporating a Speed Pocket into the JetSpeed driver promotes less spin, as well as greater ball speeds on shots struck below the center of the clubface. Research suggests 72% of all golf shots are hit below the center of face, so the JetSpeed driver is designed to minimize the ill effects of shots struck below center.