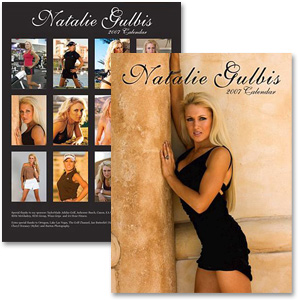 Las Vegas, Nevada (December 18, 2013)–It was all smiles at Las Vegas' Rio Secco Golf Club for the Natalie Gulbis Charity Classic. Gulbis annually hosts the event to raise funds and awareness for the Boys and Girls Clubs of Southern Nevada. She has her own campus named for her and takes time out to spend with the kids in addition to enticing sponsors to join her at the tournament. Gulbis hosted a clinic prior to play and also spent time with some of the kids who came out to see her. Bank of America was a main sponsor of the tournament. –By Brian Hurlburt

"What an incredible yesterday day!" tweeted Gulbis about the event. "Thank you to every one who supported my event yesterday for the Boys and Girls Clubs of Southern Nevada." Gulbis spent time greeting players in addition to sharing her golf knowledge with the golfers prior to tee off. Gulbis works with Butch Harmon whose school is based out of Rio Secco Golf Club.

Gulbis has spoken to us in the past about the importance of charity and how the Boys and Girls Clubs are near and dear to her heart. It was a life goal for her to open a campus with her name on it, and that dream was realized earlier this year with the opening of the Natalie Gulbis Boys and Girls Club which is located in Southwest Las Vegas.

“Opening this Boys and Girls Club in Las Vegas was the coolest thing I have done as a professional golfer,” said Gulbis shortly after the grand opening of the Club. “I was on the range talking with Butch Harmon about how special it was. I have been fortunate to do a lot of cool things in my career including playing in the Solheim Cup, winning on the LPGA Tour, and have been a part of so many great charities, but it was amazing to be around those kids who were so excited to spend time around me and to learn about the game of golf. It was a feeling that is hard to describe. Those kids were so cute that I went back a couple days after the opening and brought in pizzas and they tackled me. I was only home for about 24 hours during that trip, but my plan is to spend a lot of time at the Club when I can. I just can’t wait to go back and spend time with them. We’re going to put in a putting green and teach them about golf and it is going to be wonderful. Over the last few years where I spend my time has shifted to more of a charity focus and a many of my business calls are about the Boys and Girls Club. I always enjoy going to a Club, but when you have a club that has your name attached to it, they get extra excited because they see that name on the wall and they know that person is helping their club and continuing to donate and help them. Those kids are so appreciative. They didn’t ask me to teach them golf or take them golfing. They asked me to play kickball with them or read to them or color with them. Or can I help them with their homework. It makes you feel so good that they are so grateful and authentically excited to spend time with you.”

Gulbis has visited her club several times. But it was the kids who visited her at the golf course for her tournament. They helped hand out the trophies and posed for photos with Gulbis. Part of the grand prize for the tournament winners–net and gross–is that the foursomes will be flown by helicopter to the event in 2014. Event organizers estimate that the total amount raised will be about $100,000, but the official amount is still being tallied to include the silent auction and all donations.