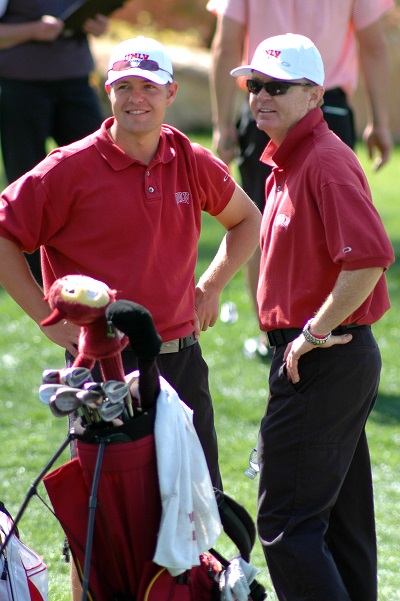 Las Vegas, Nevada (December 26, 2013)–One of the most respected sports teams in Las Vegas and at UNLV is the men's golf team which is led by Hall of Fame Golf Coach Dwaine Knight. And as the calendar winds down, the list of accomplishments for 2013 is impressive for the current program and previous players. The year was highlighted by the team making the Elite Eight of the NCAA Golf Championships and former Rebel Adam Scott becoming the first former Rebel to win a major. Scott won The Masters. –By Brian Hurlburt

Scott sent a note to Knight following The Masters win after the coach sent him a photo of the marquee in front of the Thomas and Mack acknowledging his 1999 All-American year at UNLV in addition to The Masters win. "This is amazing!' said Scott. "Thank you for sending this thru. UNLV is part of the journey that I am on and taught me so much. I am a proud Rebel!"

The UNLV Men's Golf Team has a long and deep history which includes a team national championship in 1998 plus two individual NCAA titles. Warren Schutte won it all in 1991 while Ryan Moore won his championship in 2004. The Rebels made it back to the NCAA Finals in 2013 and used an electrifying shot by sophomore Kurt Kitayama to make the cut. With the Rebels needing a miracle, Kitayama knocked in a shot from 208 yards out on the par-4, 523-yard ninth hole, which was his final hole of the day. The eagle catapulted the Rebels into the match play portion of the finals.

The UNLV Men's Golf Team is fortunate to play and practice at some of the best golf courses in Las Vegas. The official home course of the Rebels is Southern Highlands Golf Club but the team also has access to Shadow Creek and other top courses.

According to the UNLV Media Guide, there are currently nine former Rebels playing on the PGA Tour and they have combined for 21 PGA Tour wins. In 2010, the Rebels were the only college to have three players (Charley Hoffman, Ryan Moore and Adam Scott) finish in the top 21 of the FedEx Cup. Ryan Moore, who won the 2012 Shriners Hospitals For Children Open, won again in 2013. He earned the CIMB Classic.

And the current Rebel team is quickly living up to the history of the program. The team made the program's 25th-straight appearance in the NCAA regionals in 2013, finishing fourth and qualifying for the NCAA Finals. The Rebels also won the 2013 Carmel Cup Champions at Pebble Beach and the ASU Karsten Invitational. And Rebel Kevin Penner won the Mountain West individual title in addition to finishing second at the NCAA Championships. He was also named a Golf Coaches Association of America All-American and UNLV's Male Athlete of the Year.