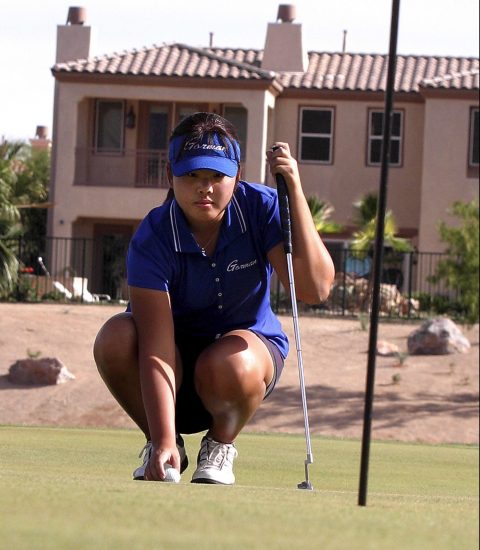 Las Vegas, Nevada (December 28, 2014)–This is the second in at least a two-part series on the pros who play the biggest tours in the world and have strong Vegas ties. There are so many that it is tough to fit it in to even two article, and we also consider this an active list because seemingly on a daily basis a player moves to Las Vegas to take advantage of everything the Ultimate Golf City has to offer. Read on for the 2014-15 PGA TOUR, Champions PGA TOUR and LPGA Tour Las Vegas Player Guide Part Two or click here to view Part One. –By Bill Bowman.

Jeff Gallagher–A journeyman player on the PGA Tour and Web.com Tour, he won the 1991 Ben Hogan Cleveland Open and the 2000 South Carolina Classic on the Web.com Tour. His best finish on the PGA Tour is a fifth at the 2003 Greater Milwaukee Open. He won a little over $800,000 in his PGA Tour career. His brother, Jim Gallagher, is becoming a force on the Champions Tour and his sister is LPGA Tour player Jackie Gallagher-Smith. He now works for the Bob May Golf Academy in Las Vegas.

Special Note: Many of the players listed in this guide play and practice on a regular basis at TPC Las Vegas, a resort course owned and operated by the PGA TOUR. The cool thing is that all goflers can play TPC Las Vegas and you never know when you will run into a Tour pro on the course, the range or in the Grille. Click now to view the official TPC Las Vegas website.

Bill Lunde—He’s the perfect version of the working man’s pro golfer. Lunde was the captain on UNLV’s national championship team in 1998. He went on to join the Tour, but left the game in 2005 to join the working world. But he came back 18 months later and, like many players, has been hot and cold. He’s won on the Tour (2010 Turning Stone Resort Championship), but just this past year he spent the season on the Web.com Tour and played well enough to be in the Top 25 and earn his PGA Tour card for this year.

Ryan Moore–Moore is UNLV’s victory machine. During the final year of his college career (2004), he won five major championships. On the PGA Tour, he defended his title at the CIMB Classic this year and has earned more than $20 million in his career. He’s won four times on Tour and has proven his consistency with 46 top-10 finishes.

Kevin Na—His Las Vegas ties include a hometown victory in the 2011 Justin Timberlake Shriners Hospitals Open. He spends many days on the back of the range at TPC Las Vegas, honing the skills that have helped him earn more than $17 million on the Tour. He also has six runnerup finishes.

Chris Riley–A 1996 grad of the UNLV golf program (teammates included Chad Campbell and Ed Fryatt), Riley has won once on the PGA Tour, the 2002 Reno Tahoe Open. He also had four runnerup finishes and has won $11.5 million during his career.

Inbee Park–The Bishop Gorman graduate has been a superstar on the LPGA Tour. She has nine Tour wins and is the No. 1 ranked player in the world. She’s won almost $10 million in her short career (she turned pro in 2007) and won three times on the LPGA Tour in 2014. She also had 17 top 10 finishes.

Scott Piercy– Born and raised in Las Vegas, Piercy turned pro in 2001 and got his big break in 2007 as he won the $2 million top prize in The Ultimate Game held at Wynn Golf Club. He’s now won on the PGA Tour twice, the 2011 Reno-Tahoe Open and the 2012 the RBC Canadian Open. He also won twice on the Web.com Tour in 2008. He’s now earned around $10 million on Tour.

Kevin Penner–The UNLV grad (2013) turned pro that same year and had one career start on the Web.com Tour in 2013, missing the cut. He’s had one career PGA Tour start, this year’s Shriners Hospitals for Children Open, where he made the cut and finished tied for 43rd. He made a name for himself when he won the 2012 Nevada Open. He just finished tied for 94th at the PGA Tour’s Q-School, a fourth-round 66 being his highlight of the event.

Alex Prugh–Alex and his young family moved to Las Vegas full-time a couple years ago and soon after Prugh earned full-time status on the PGA TOUR. Prugh won the 2009 Michael Hill New Zealand Open on the Web.com Tour and in the 2015 PGA TOUR season which started in the fall Prugh had made two of four cuts and earned a little more than $33,000.

John Riegger–John Riegger has found his calling…the Champions Tour. In two seasons on that Tour, he’s got a victory to go along with 13 top-25 finishes and almost a million dollars. On the PGA Tour, he played in 224 events with three top-10 finishes and earned $2.2 million. He’s got Champions Tour conditional status locked up for 2015 after finishing tied for 6th at Q-School.

Adam Scott–UNLV’s flagship player teed it up for the Rebels in 1998-1999. Since that time he’s lit the golf world on fire and was ranked the No. 1 player in the world for a time. He’s won 11 times on the PGA Tour and pocketed more than $37 million. And that doesn’t include his other worldwide wins. He and wife Marie Kojzar are expecting their first child in early 2015.

Vic Wilk—Vic is a smooth lefty who played the mini tours for many years earning a win on the Nike Tour (now the Web.com) in addition to winning the Nevada Open. Wilk now is an instructor at the Butch Harmon School of Golf where he works with Tour pros, top amateurs, juniors and everyday players. One of his star pupils is Brady Exber, a lifelong amateur who was named the 2014 Senior Amateur of the Year by Golfweek Magazine.