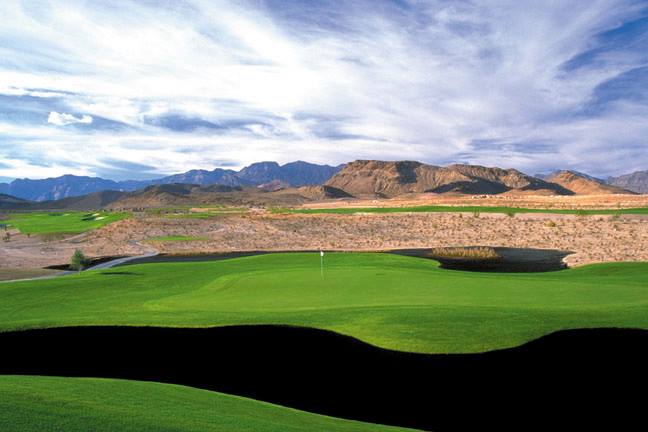 Las Vegas, Nevada (Updated January 5, 2014)–Jack Nicklaus' Bear's Best Las Vegas is a favorite for local and visiting Las Vegas golfers. The resort course features 18 replica holes hand-picked by Nicklaus from more than 270 golf courses that he has designed around the globe. And not only do the holes share design features, but elements from each region are added to the Vegas holes, whether it be palm trees from Cabo Del Sol in Mexico, pine trees and elevation change from Castle Pines in Colorado, or black slag sand from Old Works in Montana. Read on for a comparison of Vegas' Old Works vs. the original in Montana. –By Brian Hurlburt.

The fourth hole at Bear's Best Las Vegas is a replica of the 7th hole at Old Works, which has been rated as the #1 course you can play in Montana by Golfweek Magazine. The course was built on the site of an old copper smelter and is said to be the only golf course ever built on the site of Federal EPA Superfund site. A Superfund site is an area that was previously used for mining but is cleaned up and becomes environmentally friendly. Click now for Bear's Best Las Vegas rates and tee times reservations at the official website.

"Like a Phoenix rising from the ashes, the Old Works Golf Course has been reborn on the site of Anaconda's historic century old copper smelter," is the official opening line of the Old Worls description at the course's official website.  In 1883, an Irish immigrant, Marcus Daly, backed by J.B. Haggin and others, purchased the land on which the city of Anaconda and the Old Works were to be built. In September 1884 the Upper Works began production, with a capacity to treat 500 tons of ore daily. Remnants of the Upper Works can be seen today when playing the front nine at Old Works.

The most unique feature of playing Old Works, the original, or the replica in Las Vegas, is experiencing the black slag in the bunkers. According to Nicklaus, the slag is easier to play out of than normal sand because the coarseness of the slag keeps the ball on top of the substance as opposed to sinking like the ball has the potential to do in typical sand bunkers. Black slag is the byproduct of copper ore smelting, and piles of the substance were abundant during the mining days of the 1800s and early to mid-1900s.

While no mining remnants nor snow–Old Works in Montana is closed part of the year due to weather but you can play Vegas' Old Works year round–are found in Vegas, the look and feel of the holes are pretty similar. And in Vegas, once you're done playing in "Montana", you'll soon find yourself experiencing golf in California, Colorado, Mexico, and other unique golf locales. Without ever having to leave Las Vegas.