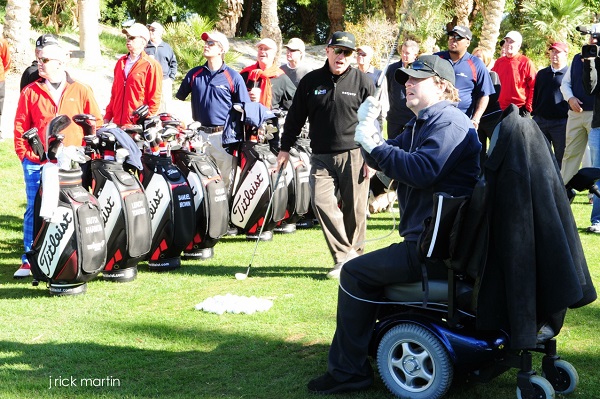 Las Vegas, Nevada (January 15, 2014)–Soldier Daniel Meyer served his country proudly. But while on a tour of duty in Afghanistan, he was exposed to burn pits where the military burns trash. That exposure changed his future because he now suffers from bronchiolitis obliterans, a terminal illness. But a silver lining for Meyer is a love of the game of golf. Meyer was introduced to the game about a year ago during an event hosted by Las Vegas Golf Region resident Butch Harmon and his Harmon's Heroes Foundation. But Meyer needs some help to continue to enjoy his passion. —By Brian Hurlburt.

Meyer says breathing in the toxins from the tar pits caused the disease that has forced him into a wheel chair in addition to making it difficult to breathe. And due to his immune deficiency, he is unable to stay outdoors and enjoy the game he has come to love. But, Meyer says, there is an alternative and he is working to secure a golf simulator for his home which would allow him to play golf and pass the time more enjoyably.

ForeSight Sports has offered a golf simulator to Meyer, but he is just short on coming up with enough money to secure the expensive simulator. The Harmon's Heroes Foundation and others have made generous donations of $15,000 but about $5000 more is needed to make his dream a reality. ForeSight Sports has also deeply discounted the simulator.

"The opportunity to bring this in the house would be life-changing," Meyer told Fox 5 Las Vegas News recently. A year ago, this writer had the chance to meet Meyer, and he was upbeat and always had a smile on his face throughout the Harmon's Heroes event. And he was quick to note that he isn't the only one suffering from the disease. He also said that golf had saved his life.

"This invitation and now getting involved with golf has saved me," said Meyer about being invited to attend the Harmon's Heroes event at Green Valley Ranch and Bali Hai Golf Club. "This is the first time in about six months I have been out of the house and it has motivated me to do more and continue living."

So if you are interested in assisting Meyer and to help make his life a little better, you can reach out to him through his email address at me@danielmeyerblog.com.