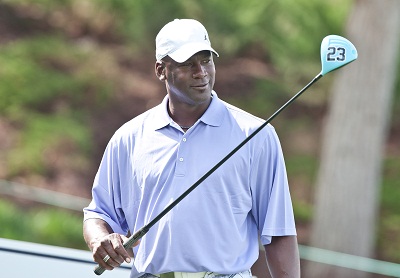 Las Vegas, Nevada (February 1, 2014)–Michael Jordan and his celebrity and athlete friends will descend upon Las Vegas, ARIA and Shadow Creek for the annual playing of the 13th Annual Michael Jordan Celebrity Invitational (MJCI). The event brings a who's how together to benefit several worthy causes and is the only time all year that Shadow Creek is open to the public. The event is April 3-6, 2014, and tickets are now on sale. Click now for the official tournament website. –By Brian Hurlburt.

"Each year, the MJCI gets even better," said Jordan in a statement. "I'm excited to partner once again with ARIA and Shadow Creek to host this incredible event and support some very worthy causes. Our guests, sponsors and fans had an amazing time last year, and we're looking forward to another great weekend."

Shadow Creek is regarded by most as a bucket list golf experience and is a favorite of the celebrities and spectators who attend the event. Special VIP seating which includes access to skyboxes with open air decks and complimentary food and drinks are available as is general admission seating.

The two rounds of the Celebrity-Amateur Competition, which pairs one celebrity golfer with four amateur participants, will take place Thursday, April 3 and Friday, April 4 at Shadow Creek. The MJCI two-person, 36-hole scramble format tournament begins Saturday, April 5 and includes only the competing celebrities. The second and final round of MJCI will be played Sunday, April 6. Additional festivities and events surrounding the Saturday and Sunday competition, as well as celebrity participants and guests, will be announced in the near future.

"We look forward to welcoming Michael Jordan, his celebrity invitees and fans back to ARIA and Shadow Creek for another great year," said Bobby Baldwin, president and COO of ARIA, in a statement. "The Michael Jordan Celebrity Invitational is a terrific opportunity for us to showcase all that these beautiful destinations have to offer while raising funds and awareness for important charitable organizations."