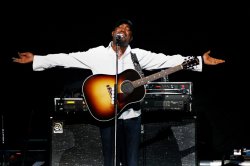 Las Vegas, Nevada (March 24, 2014)–The Academy of Country Music Lifting Lives Celebrity Golf Classic will be held April 6, 2014, at TPC Las Vegas, a Vegas resort course owned and operated by the PGA TOUR. Country superstar Darius Rucker, an avid golfer, will host the event again. Rucker is very involved with ACM and its charites. He also wrote, "Together, Anything Is Possible" to help the PGA TOUR raise money for charity. TPC Las Vegas is known as the home of professional golf in Las Vegas because several tour professionals play and practice there. The course is also the home of several high-level celebrity and charity events in addition to the Lifting Lives tournament. –By Brian Hurlburt.

Money raised from the event benefits the ACM Lifting Lives Diane Holcomb Emergency Relief Fund, which provides immediate relief to those in need in the music industry. The scramble is also part of the ACM’s “The Week Vegas Goes Country” leading up to the ACM Awards. The ACM Awards will be broadcast live from the MGM Grand Garden Arena in Las Vegas on Sunday, April 6, at 8 p.m. ET on CBS.

Want to play golf at TPC Las Vegas before or after this event? Click now to visit the official website of TPC Las Vegas and reserve your official golf packages or tee times.

Rucker has always loved the game of golf. "First of all, I love being outside, and I get outside so little, really, if you look at the whole thing," he told CMT.com. "I mean … it's me against the course. I love that." Besides the Vegas event, he is also hosting his fifth annual Darius and Friends Celebrity Golf Tournament on June 3 in Nashville.