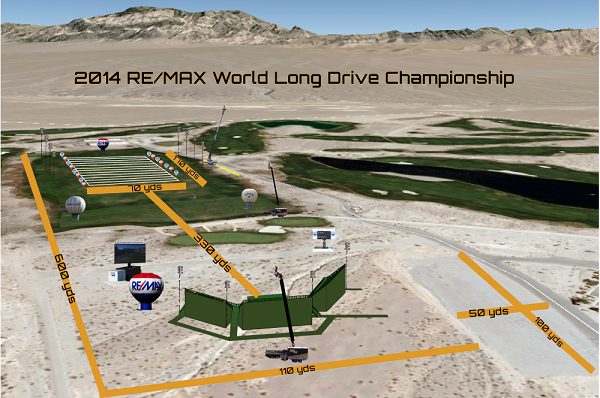 Las Vegas, Nevada (April 22, 2014)–The new home of the Las Vegas 8 finals for the 2014 RE/MAX World Long Drive Championship is the Las Vegas Paiute Golf Resort. Today, 2013 world champion, Tim Burke, and two-time champ, Jamie Sadlowski, officially revealed the new home in front of VIPs and media. With a down wind, Sadlowski and Burke were putting up big numbers on Trackman led by Burke who was hitting swing speeds in the mid-140s and taking the ball 480 yards down the new grid. "I was getting career numbers out there," said Burke. Qualifying takes place during championship week in Mesquite, Nevada, September 20-27 before the Las Vegas 8 quailifers return to the Las Vegas Paiute Golf Resort on November 4 for the live finals on Golf Channel. —By Brian Hurlburt.

"The Las Vegas Paiute Golf Resort offers everything we are looking for from a host venue,” said Art Sellinger, Long Drivers of America owner. “The final eight competitors for the RE/MAX World Long Drive Championship will have the opportunity to compete in a fantastic setting as they vie for the world title. The grid and teeing area will be world class for the ‘Las Vegas 8’ finalists, and our sponsors and guests are in for a real treat playing the spectacular and perfectly conditioned Pete Dye courses."

The Las Vegas Paiute Golf Resort features three Pete Dye signature golf courses and is a favorite among local and visiting Las Vegas golfers. The resort annually hosts the Duel in the Desert, a major on the Golf Channel Am Tour, which attracts more than 400 golfers over three days and is sold out months in advance. The resort was also the site of an early episode of Golf Channel’s Morning Drive which has blossomed into must-see television for all golfers.

"We are excited to be selected as the host facility of the 2014 RE/MAX World Long Drive Finals,” said Chad Gunier, Las Vegas Paiute Golf Resort General Manager. “To be associated with this event is a huge honor, and this recognition once again reveals that the Las Vegas Paiute Golf Resort is not only a premier Las Vegas destination, but an international golf destination for those who are looking for an unforgettable golf experience. Plus we have enjoyed a long partnership with Golf Channel and are thrilled to bring this flagship event to our facility."

The RE/MAX World Long Drive Championship took an epic jump in 2013 with a new long-term partnership with Golf Channel, receiving unprecedented exposure on the network with more than 180 hours of national and international airtime. Golf Channel executives have also announced that October will again be Long Drive Month on the network. “As part of our mission to cover all aspects of the game, the RE/MAX World Long Drive Championship not only adds another compelling golf competition to our schedule – because everyone loves the long drive – but it also lends itself to being integrated into other programming that our viewers love, like instruction,” said Tom Knapp, Senior Vice President of Programming, Golf Channel.