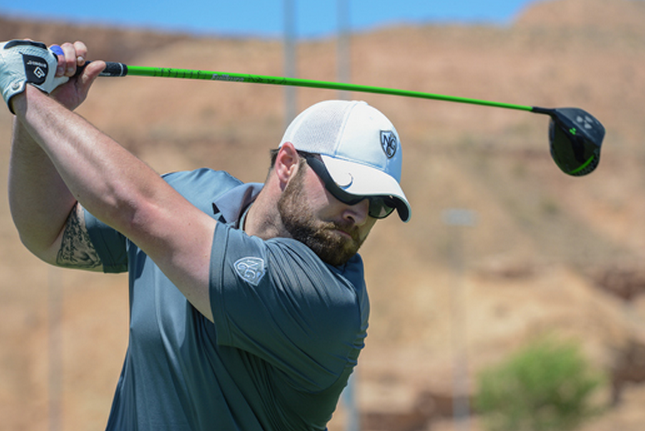 Mesquite, Nevada (May 14, 2014)–Inspiration and dedication was on full display in Mesquite, Nev., recently. Defending champion Jared Brentz staved off a triple-rematch with Brandon Jacks in a championship playoff to win Friday’s Mesquite NV ParaLong Drive Nationals. Jacks, of Prescott Valley, Ariz., became the first leg amputee golfer to go over the 400-yard barrier in the third round with a 401-yarder on the Grid at the Mesquite Sports & Event Complex. Brentz, a double-leg amputee from Nashville, Tenn., bested that mark in the playoff with his 409-yard drive to win the event. –By Brian Hurlburt.

“The event was held in conjunction with Olympic Day 2014, where the ideals perseverance, participation, and respect for other participants and officials were personified in this special day in Mesquite,” said Bryan Dangerfield, Mesquite NV Director of Athletics and Local Organizing Committee Chair.

Dean Jarvis, the founder of the event, hopes to one day have Long Drive as part of the ParaOlympics. The ParaLong Drive Nationals included some of the top disabled golfers from throughout the U.S. and Canada such as Brad Clayton, Oxford, N.C., who won the arm-assisted category; five-time North American One-Armed Golfer Association champion Vince Biser, Baltimore; and Alan Gentry, Louisville, who became the third arm amputee of the day to go over 300 with a 310-yard hit.

Anthony Netto, San Diego, won the Paramobile division with a drive of 295-yards. Netto, who founded the “Stand Up and Play Foundation, is paralyzed from the waist down and hits with both arms from a mobile cart he designed that allows paraplegics to swing a club and play golf. One-armed Paramobile champion was Jake O’Donnell of Baldwin Park, California.

Bill Davis, a visually impaired golfer from Rancho Cucamonga, Calif., became the first blind golfer to surpass the 300-mark in Mesquite when he hit a 324-yarder. Davis, a former World-Class decathlete before his eyesight became deteriorating, will join a larger group of blind competitors who are scheduled to attend the ParaLong Drive Worlds event next Oct. 16-17 in Mesquite.