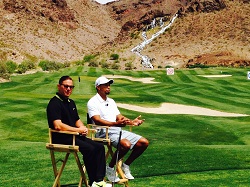 Las Vegas, Nevada (May 17, 2014)–For reportedly the first time, Tiger Woods and Sean Foley conducted a clinic together. The event, held at Cascata, was part of the weekend-long festivities of Tiger Jam, a major fundraiser for the Tiger Woods Foundation. For at least the third time at the annual Tiger Jam, an injured Tiger Woods was unable to hit full shots during the clinic. When Tiger was asked about his return to playing, he responded, "This year," with a laugh, then added, "It'll be this summer. I don't know when, yet. I'm just practicing and strengthenning, and trying to get back. … no hurry." Foley and Woods worked with three amateurs and also fielded questions during the clinic. Click to our Facebook page for a video that shows Tiger Woods discussing his best putting secrets. –By Brian Hurlburt.

Foley and Woods worked well together, with both deferring to each other at certain times to give tips to the amateurs and field questions. Also with Woods during the event. off to the side watching, was Lindsey Vonn. Prior to the clinic Woods helped Vonn with her short game.

Want to play Cascata, the home of the Tiger Jam? Click now to view the official website and reserve your times at this exclusive course which is operated by Caesars Entertainment. Check out the stunning photo gallery as well.

Among the questions Woods fielded was about if he still gets nervous. "Absolutely," said Woods. "Nerves are great and being nervous shows you care." Foley added that he once asked an emergency room surgeon about what emotion he feels when he is trying to save a life and if nerves are a factor. "He told me, "I'm scared sh..less,'" recounted Foley for the VIP crowd at Cascata. "Then he said, 'The day I'm not scared anymore is the day I will retire.'"

The 2014 Tiger Jam kicked off Friday with the clinic and continued into the evening when poker legend Phil Hellmuth teamed up with Woods to host a Poker Night presented by the World Poker Tour. For a $10,000 buy-in, participants joined Woods, Hellmuth, Poker Hall of Famer Doyle Brunson and other great players for an exclusive night of poker followed by a Pre-Jam Party at Moorea Beach Club at Mandalay Bay. The Tiger Jam event concludes with OneRepublic headlining a Saturday evening concert.

The Tiger Woods Foundation was created in 1996 by Tiger Woods and his father, Earl, and has reached millions of young people by delivering unique experiences and innovative educational opportunities for youth worldwide. What began as simply a dream to provide young people with opportunities and the tools needed to achieve a bright future has grown into a global organization that has served young people around the world. Currently there are more than 100 students attending college with assistance from the Earl Woods Scholarship Fund.