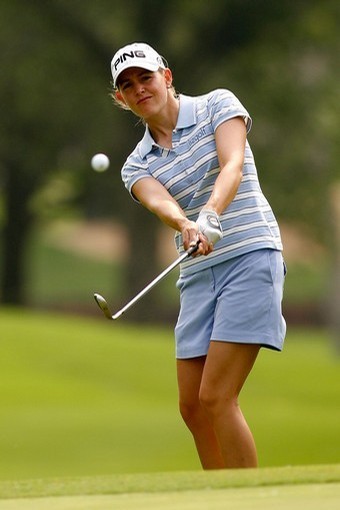 Las Vegas, Nevada (June 14, 2014)–Two PGA of America professionals, an LPGA Tour veteran, and a longtime amateur make up the 2014 class of the Las Vegas Golf Hall of Fame. The 2014 class is: Mike Davis, a Golf Magazine top 100 teaching pro; John Difloure, a former vice president of the PGA of America who becomes the first posthumous inductee in the Hall's history; LPGA Tour pro Stephanie Louden who grew up in Las Vegas; and Frank Acker, who has won more than 50 amateur tournaments. The public is invited to the official Las Vegas Golf Hall of Fame Classic Pro-Am on June 30 at Cascata and the official Night of Induction which kicks off PGA TOUR week in Las Vegas as part of the Shriners Hospitals for Children Open on October 10. –By Brian Hurlburt.

“This is the perfect way to kick-off PGA TOUR week in Las Vegas this year since we are asking our fans, players and sponsors, ‘What’s your tradition?’ as it relates to our tournament,” said Adam Sperling, tournament director of the Shriners Hospitals for Children Open. “The Las Vegas Golf Hall of Fame Night of Induction is a very popular part of the week. The new and previous inductees are responsible for so many golf traditions in Southern Nevada that we are honored to host them for such a special and memorable evening.”

The mission of the Las Vegas Golf Hall of Fame is to celebrate and bring awareness to players, administrators, benefactors, groups, instructors, teams, and other worthy golfers who have served the game of golf in Las Vegas in a positive and meaningful way; whether through performance on the course, volunteerism, financial support, promotion, or other dedicated service. An additional aspect of the mission is to help reveal Las Vegas as a great golf destination and has done this by hosting international media at the home exhibit. The museum-quality exhibit in the clubhouse of Las Vegas National Golf Club features an in-depth Las Vegas golf time line, historic photos, and a special area honoring the Las Vegas Founders Club that features the official trophies used by Las Vegas’ PGA Tour and Champions Tour events. The museum is open and free to the public during regular Club hours. A 16-person committee made up of Las Vegas golf professionals, media, amateur association leaders, and Hall of Fame members, oversees the voting process. www.LasVegasGolfHOF.com

Frank Acker is a longtime resident of Las Vegas and one of the top amateurs in the history of Southern Nevada. He has won more than 50 amateur and senior amateur tournaments in the Las Vegas area, and was named Senior Division Player of the Year from 2007-2011. He also won the prestigious 2004 Champions Cup in Texas with longtime teammate and fellow Las Vegas Golf Hall of Fame member Brady Exber. He has also served as a member of the Southern Nevada Golf Association board of directors for more than 20 years and was a driving force of bringing the prestigious Medalist Tour to Las Vegas.

Mike Davis is a Top 100 Golf Magazine teacher and the director of instruction for the Walters Golf Academy. He has also been voted as the #2 instructor several times in the state of Nevada by Golf Digest. He is also a PGA of America Master Professional, an honor earned by only a few professionals. He has been named Teacher of the Year 12 times by local PGA of America chapters, and earned the same recognition at a regional level four times. He also played in three U.S. Opens and one PGA Championship.

John Difloure, (1909-1986), will become the first posthumous honoree in the history of the Las Vegas Golf Hall of Fame. Difloure served as the head professional at Las Vegas Municipal Golf Club from 1945-1980 and is one of the most influential PGA of America professionals in the history of Las Vegas. He served as the national vice president of the PGA of America in 1973 and also as the regional president of the Rocky Mountain Section of the PGA. He helped create the Nevada Golf Association, Nevada State Women’s Golf Association, the Southern Nevada Golf Association, and created the Las Vegas City Amateur. He served in the United States Navy from 1942-1945.

Stephanie Louden grew up in Las Vegas and was one of the best junior golfers and high school golfers in the history of Southern Nevada. She is a member of the Southern Nevada Junior Golf Hall of Fame in addition to the Southern Nevada Sports Hall of Fame. She won the Nevada State High School Championship in 1996 prior to earning All-American status at Stanford University. She also played for 11 years on the LPGA Tour and served on the executive committee of the Tour from 2006-2008, including a role as vice president in 2008. She now resides in Texas.