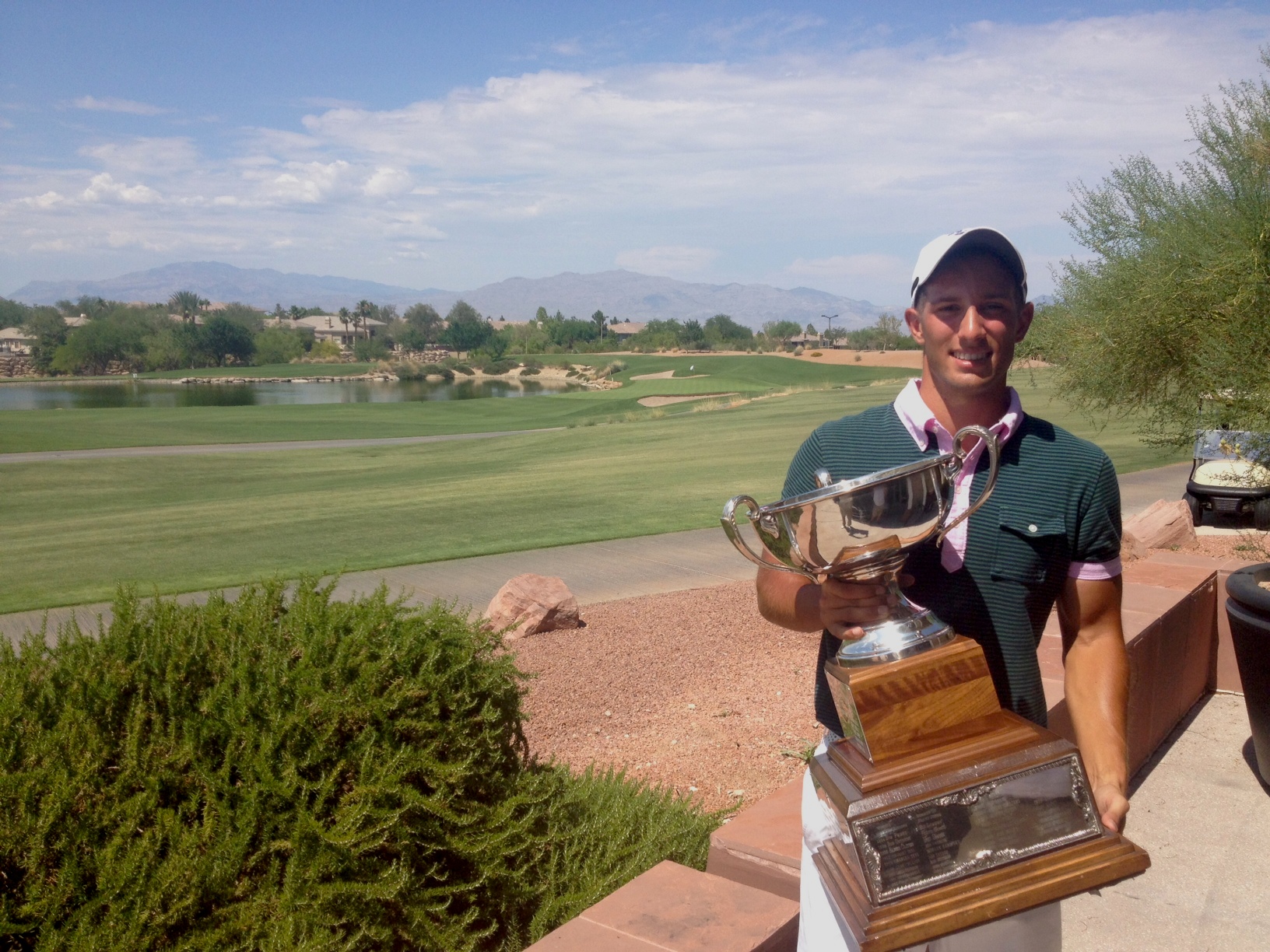 Las Vegas, Nevada (July 17, 2014)–Nicholas Smits had no clue what he was about to hear from Nevada State Amateur Tournament Director Tanner Bown when he walked in the clubhouse to turn in his final-round scorecard. What Bown told him was shocking. Bown relayed to Smits, a senior on the University of Nevada golf team, that he was tied for the lead. A short while later, Smits parred the 18th hole at the PGA TOUR-owned TPC Las Vegas in a playoff–defeating recent Las Vegas HS graduate Brandon Bauman–and walked off the course as the champion of the 2014 Nevada State Amateur, the most prestigious amateur tournament in the state. His final round 68 was the best of the day and allowed him to erase an 8-shot deficit he faced starting the day. –By Brian Hurlburt

“I was very surprised and excited when Tanner told me that I was tied for the lead after I turned in my scorecard,” said Smits, who originally is from the Netherlands and also lived in Australia for seven years. “I really had no idea and believed maybe I might finish in the top five, but never thought I had a chance to win. It’s very special for me to win because I play for the University of Nevada, and it’s always an honor to win a state championship. The final round wasn’t pretty, but I knuckled down and grinded the entire day. My game has been on an upswing lately and winning this is a bonus.”

TPC Las Vegas is a previous host of events on both the PGA TOUR and Champions PGA TOUR. Former champions of professional events played at TPC Las Vegas include Hale Irwin, Jim Furyk, Jim Colbert and Stuart Appleby among others. Several current PGA TOUR pros play and practice at the course when not playing in PGA TOUR tournaments. Click to the official website of TPC Las Vegas to reserve your personal tee times at this Las Vegas resort course.

Despite losing in a playoff, Bauman, who will play golf at the University of California Santa Barbara this fall as freshman, took away a silver lining from the tournament. “The final round was probably the worst ball striking round I’ve had in a long time, and I really had to scrape it around to shoot a 74,” said Bauman. “The main thing I will take away from this tournament is to never count myself out. Several times I really thought I had let it slip away, but then I realized I still had a shot to win. In the future I will stay more positive and patient.”

Las Vegas Golf Hall of Famer Brady Exber, the winner of the Nevada State Amateur in 1991 and 2008, was in the lead most of the back nine during the final round, but made bogeys on two of the final three holes to finish one shot out of the playoff. Exber tied for third place with Jordan Wright who was the leader after both the first and second rounds. Exber fired rounds of 71-72-71—214 while Wright recorded rounds of 67-70-77—214.

“It is hard not to be compelled by a player coming back from eight shots on the last day to win,” said Tanner Bown, Director of Competitions, Southern Nevada Golf Association. “During the back nine today, we had about 7-9 players that could have won the championship. That made for a fun event and an extremely exciting last day. The TPC Las Vegas was a great course for our championship and General Manager Dan Hammell and his staff were terrific and the course was perfect.”