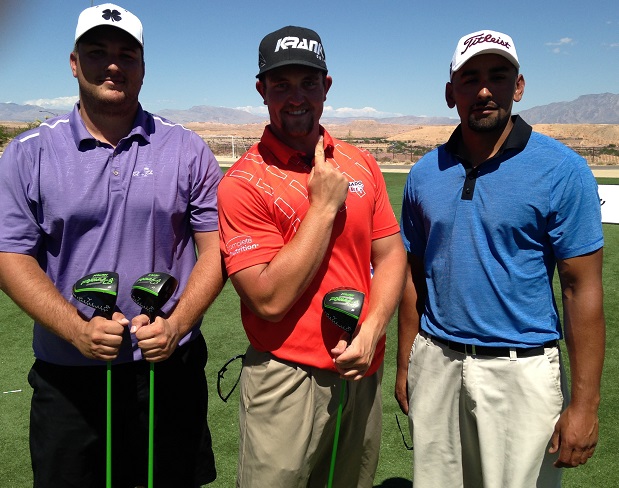 Mesquite, Nevada (August 10, 2014)–The Region 2 Championship was contested at the Mesquite Sports and Event Complex this weekend and 10 of the longest golfers on earth qualified into the field of 128 players for the RE/MAX World Long Drive Championship which will be September 25-27, 2014, right back at the Complex. Rich Moore won the championship with a deep drive of 412 yards. Ruben Carmona was second at 409 yards while Miles Mulkey was third with a drive of 406 yards. — By Brian Hurlburt.

"Today's win was all pure don't beat myself," said Rich Moore, who qualifed for the field of 128 for the second consecutive year. "The biggest thing I do is try to stay disciplined to my own swing and let whatever happens down the grid. That's exactly what I did today. That's what my game plan has been all year. It started with a win at the Endless Invitational and I followed that up with a win in Omaha and now I am catching fire right before the finals with this great win at Region 2, the final regional qualifier of the year. I am looking forward to coming into the RE/MAX World Long Drive Championship very hungry and very disciplined."

Official scoring of the Shootout:

The 10 qualifiers–and the others in the finals–will vie to become one of the "Las Vegas 8" finalists who will compete live on Golf Channel on Nov. 4 at the Las Vegas Paiute Golf Resort for the world title and $250,000 first prize. For a complete list of golfers who have qualified for the World Finals in addition to these six, click here. Also part of Mesquite Championship Week are the World Finals in six other divisions including ladies and senior.