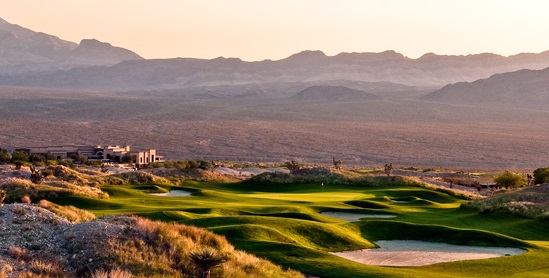 Las Vegas, Nevada (August 12, 2014)–In 2013, severe flooding forced the shut down of all three golf courses at the Las Vegas Paiute Golf Resort. However, in 2014 the recent heavy rains and flooding in the northwest area near the courses, each designed by the legendary Pete Dye, have not impacted any of the courses and the Paiute has remained open despite some in the public believing differently. "We have received a lot of calls and emails asking about how the courses are doing because there has been some news video airing showing flooding on the highway near us, but we just want everybody to know that the flooding was not on our courses and we have no damage," said General Manager Chad Gunier. "We are open and operating business as usual and welcoming golfers from all over the world plus taking care of our Las Vegas members." –By Brian Hurlburt.

The three Dye courses at Paiute are the Wolf, Snow Mountain and Sun Mountain. In late August of 2013, heavy rains sent water and debris cascading down the nearby mountains and the damage caused by the flooding forced the closure of the courses. Snow Mountain re-opened in October followed by Sun Mountain in November. The Wolf re-opened in January.

According to Pauite officials, in addition to repairing–and in some cases enhancing–the courses last year following the flooding, crews worked extensively to create drainage areas and other flood control to help prevent future damages should major rains hit the area as they did last year. The damage was exacerbated in 2013 because of the Carpenter 1 forest fire during the summer which burned much of the vegetation in the Mount Charleston area which is located near the course.

Gunier, a PGA of America professional, also reported that group business continues to be strong in 2014 at the Paiute and several have completed tournaments successfully on the courses and players have been very happy with the conditions. The Golf Channel Amateur Tour held the Western Classic, a major on the tour, in early August while several charity events including the Fat Boy Open to benefit Autism awareness was held at the course. In addition the resort is readying for the upcoming Final 8 of the RE/MAX World Long Drive Championship which will be held at the course and live on Golf Channel on November 4, 2014.