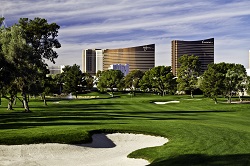 Las Vegas, Nevada (August 25, 2014)–The Las Vegas Country Club is an iconic private club and golf experience. The Club is the place where Vegas happened and current and former members are among a who's who of Las Vegas. It is a such a cool place to be a member that PGA TOUR star Davis Love III said he thinks that be would have enjoyed being a member in an interview within the pages of The Las Vegas Country Club: Chronicle of an Icon. “We always loved playing at The Las Vegas Country Club,” said Love III. “It was a fun course that played firm and fast. Plus the membership was always very supportive, and it really felt like big-time Vegas when you were there." The Club offers several levels of membership including a new national membership. —By Brian Hurlburt.

"We all knew about the history of the club, and I vividly recall how supportive everyone was," continued Love III, who won the 1993 Las Vegas Invitational. "The members would drive in their own carts and follow us around during practice rounds, and it was just a nice atmosphere. They made it very exciting for us, and made us feel at home. A lot of us are disappointed that we don’t play there anymore because we lose some history when courses like that aren’t played. I compare The Las Vegas Country Club to like a Colonial, and it’s a shame we don’t play those historic courses these days. I always felt that it would be a lot of fun to be a member of The Las Vegas Country Club.”

The Club recently announced a national membership that allows visitors to Las Vegas to experience a piece of Las Vegas while visiting the City that Glitters. The national membership offers 20 rounds of golf per year and other club amenities. The initiation fee is only $2,500 and monthly dues are $200 per month. National members must have a primary residence more than 100 miles from the Club and belong to a private club. Call 702.576.9961 for details or to reserve your membership.

The Las Vegas Country Club has hosted events on both the PGA TOUR and the LPGA Tour in addition to major celebrity events. It is also located just minutes from the heart of Las Vegas. The Club opened in 1967 and was the first private, equity club in the area. The course was designed by Ed Ault and was re-designed in 2008 by esteemed architect Mark Rathert.