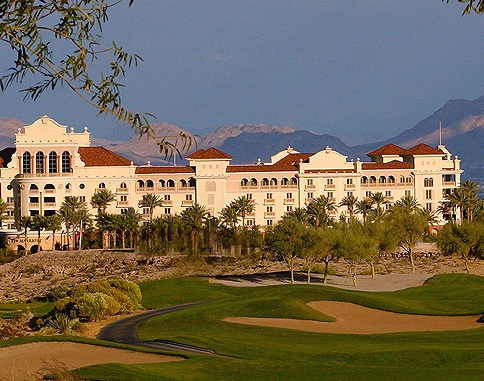 Las Vegas, Nevada (August 26, 2014)–Las Vegas is the ultimate golf city, and two of the elements that make it one of the best golf destinations in the world are the PGA TOUR-owned TPC Las Vegas and the award-winning JW Marriott Las Vegas Resort and Spa. The two combine for extraordinary Las Vegas golf packages and vacations. Recently it was announced that the JW Marriot Las Vegas earned the AAA 4-Diamond Award for the 10th-straight year. The resort is an oasis in the Las Vegas desert and located adjacent to TPC Las Vegas in the southwest part of the valley. The resort is on 50 acres and offers over-sized rooms as a standard option plus more than 70 suites, ranging from one bedroom to two bedrooms with balconies. Expansive views of the TPC Las Vegas, Red Rock Canyon or the Las Vegas Strip accent the resort's rooms. Click now to reserve your TPC Las Vegas and JW Marriott Las Vegas golf packages. — By Brian Hurlburt.

The AAA 4-Diamond recognition is just another in a long line of accolades for the resort. Earlier this year it was voted as one of the Top 5 Las Vegas Resorts by readers of Condé Nast Traveler, and recognized as a Top-Performing Business on TripAdvisor. The latest include 2014 No. 7 ranking for "Best JW Marriott Hotels & Resorts" in the world and No. 9 standing for "Best Hotels in Nevada" by U.S. News & World Report; "Best Splurge-Worthy Spa" for Spa Aquae in Desert Companion's Best of the City 2014; 2013 Gold Key Award from Meetings & Conventions magazine, which is given to properties for their overall excellence in serving meetings and events; Ceres Restaurant and Carmel Room received outstanding ratings in the Zagat 2014 Las Vegas Restaurant Survey and Wedding Wire's 2013 Bride's Choice Award for Ceremony & Reception Venue, recognizing the resort's flawless wedding planning and execution.

In 2005, JW Marriott Las Vegas Resort & Spa received its first AAA 4-Diamond Award, an honor only 5.3 percent of more than 29,000 hotels qualify, and 2014 marks the resort's 10th year of earning the distinction. The hotel has continued to receive the ranking each year by delivering a top-level of customer service and satisfaction through its top-tier luxury, accommodations, abundant amenities and more.

TPC Las Vegas is the home to professional golf in Las Vegas and offers the finest in PGA TOUR condittions on a daily basis. The course is best described as "Desert Elegance" and holes dance through the unique and beautiful desert canyons and washes of the southwest desert. An official golf concierge is on site at JW Marriott to help with all accommodations and other needs.