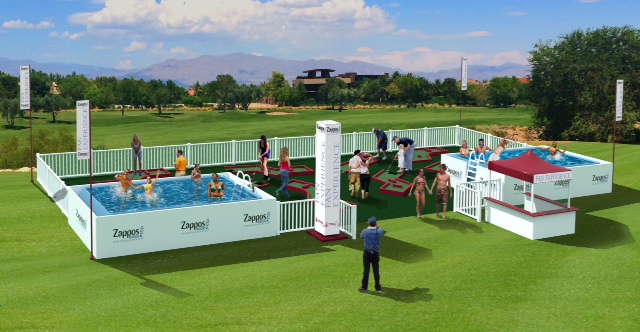 Las Vegas, Nevada (September 16, 2014)–Las Vegas is the ultimate golf city and now it may be home to one of the utlimate and most entertaining PGA TOUR events this side of Arizona and the amazing party that is the WM Phoenix Open. Today, organizers of the Shriners Hospitals for Children Open and associated sponsors announced new entertainment and "nightlife" that will be part of the 2014 rendition of the tournament. The event celebrates 32-straight years in Las Vegas when it tees up October 16-19 at TPC Summerlin. The quote of the day that may sum up the vibe of event moving forward came from Zappos.com exec Daniel Earl: "We have core values at Zappos, and one of them–my favorite–is, 'create fun and a little weirdness', and we are excited to bring that mentality to golf and the PGA TOUR." –By Brian Hurlburt.

One of the new elements–and there are several–will be six swimming pools that will be available for use throughout the tournament grounds specifically in the Zappos.com Fan Experience as well as other areas throughout the course. "We wanted to really take a page from the energy of Las Vegas and elevate the fans' experiences inside our tournament," says Adam Sperling, tournament director and the conductor of the fun and weirdness.

Sperling says it is the first time in PGA TOUR history that swimming pools will be a part of a tournament. The Zappos.com Fan Experience will be located between the 17th and 18th holes at TPC Summerlin and will also include a 9-hole putt putt course and will be free and open to the public.

Also new in 2014 will be Hyde on The Hill, which is described as "an extravagant daylife experience that continues long after the sun sets, complete with DJs, exclusive food and beverage menus featuring Hyde's signature craft cocktails and VIP service provided by the nightclub's servers." Hyde on The Hill is being created by the nightlige experts of Hyde Bellagio, one of the top club experiences available on the Las Vegas Strip. "We're honored to partner with Shriners Hospitals for Children Open this year to bring the energy of Hyde Bellagio to the golf courses for tournament guests." Hyde on The Hill overlook the holes 16-18.

As always, some of the best goflers in the world will also be coming to Las Vegas for the tournament. The event is one of the first tournaments of the 2014-15 season and players will be looking to earn valuable FedEx Cup Playoff points early on in the season in addition to taking advantage of the Vegas hospitality. Defending champion and former major winner Webb Simpson is scheduled to defend his title. Simpson will also be representing his country at the upcoming Ryder Cup prior to the Vegas event.

For the seventh year in a row, the Shriners Hospitals for Children organization will be the major sponsor of the tournament. The contract with the Shriners runs through 2017. Shriners Hospitals for Children® is changing lives every day through innovative pediatric specialty care, world-class research and outstanding medical education. Our 22 locations in the United States, Canada and Mexico provide advanced care for children with orthopaedic conditions, burns, spinal cord injuries, and cleft lip and palate. For more information, visit shrinershospitalsforchildren.org.