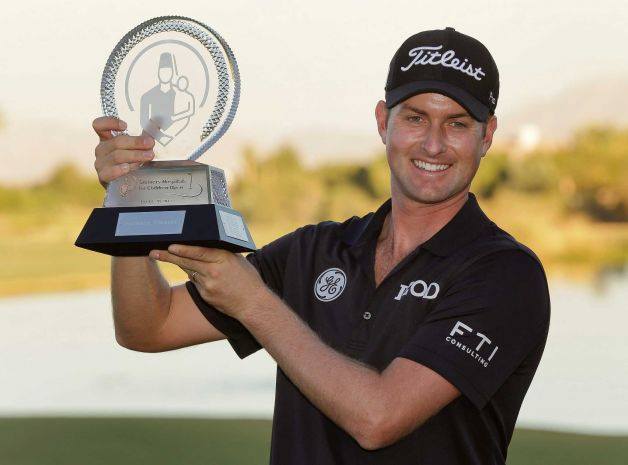 Las Vegas, Nevada (October 16, 2014)–Webb Simpson is back in Las Vegas this week to defend his 2013 Shriners Hospitals for Children Open title. He looks to become only the second back-to-back winner in tournament history. Jim Furyk won titles in 1998 and 1999. He is thrilled to be back in Vegas and ready to go. "It's great to be back," Simpson told the media the day before the event. "I love coming here. It's always great weather, as we're going to see again this week, I believe. But I think I love this golf course because it reminds me of the course I grew up playing. You have a lot of options off the tee, and greens are undulating and fast. So I'm just comfortable here, comfortable playing this kind of golf. But I feel good. I've had two weeks off after the Ryder Cup and rested up. Last week I practiced up, and it feels nice to get back at it." Several new fan experiences are also avaiilable this week for PGA TOUR fans including swimming pools and the No Par Bar hosted by Born and Raised. Visit http://www.ShrinersHospitalsOpen.com for details and ticket info. — By Brian Hurlburt.

"I definitely think the game is ready," continued Simposon. "I'm excited. "Fundamentally, my game is as good as it's been, and so it's just a matter of hopefully I won't be rusty tomorrow as I tee it up, but again, getting into my game plan. Last year I didn't tee it up Thursday thinking I had to shoot 20 something under to win. It was just one hole at a time. Last year's win will help me. There's things I learned last year about the golf course and staying patient that will help this year. So I do feel my game is good enough to win, and I'm glad the field is better. I think this field will continue to get better over the years."

Simpson is coming off his appearance at the Ryder Cup, and overall, he says, it was a great experience despite the loss by Team USA. "I had two experiences," Simpson said about the Ryder Cup. "The golf side was a terrible experience because I only got to play two matches. I showed up in Scotland really ready to play and excited to play, and when you sit three matches in a row, it's tough. So the golf part stunk for me. I'm not going to lie. I mean, if I said golf was great, you could call me a liar, and we didn't win. If I sit three matches and we win, I'll have a different answer.

"But you know, I had my wife there. We don't get many chances to be together without kids, so we had a great week. I had a great week with the teammates and the wives and the captains and so forth. Apart from golf, it was a great week. They're always memorable weeks. So kind of a bittersweet taste in my mouth Sunday night, especially having tasted success on the President's Cup teams and knowing how good it feels to win team events, and two Ryder Cup teams we've lost that I've been on. All in all, I think a lot of people make it out to be so important, but at the end of the day, it's a competition, it's the Ryder Cup, it's supposed to be fun. So I don't let it linger as long as some people may."

Simpson is part of the Vegas field that includes Ryan Moore, Charley Hoffman, FedEx Cup Champion Billy Horschel and a host of other top PGA TOUR players. So, Vegas residents and visitors, get out and support the 2014 Shriners Hospitals for Children Open.