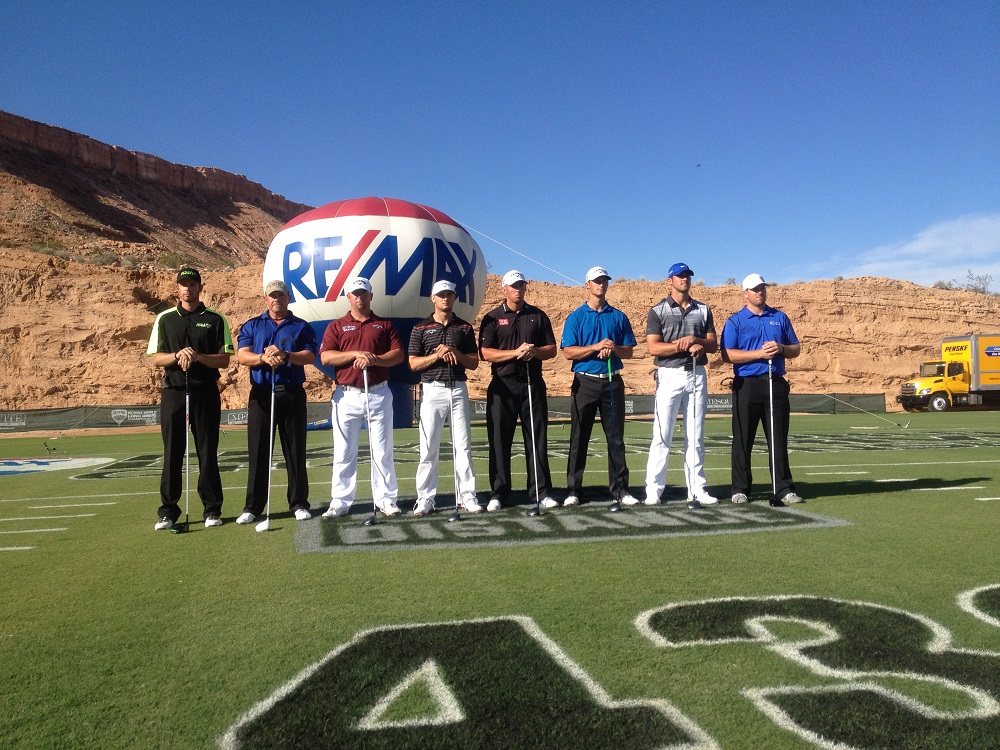 Las Vegas, Nevada (October 21, 2014)–The longest golfers on earth have been featured on Golf Channel this month on a variety of shows. The Las Vegas 8–the longest drivers of the golf ball in the world–who qualified for the Final 8 that is live on Golf Channel Nov. 4 from Las Vegas Paiute Golf Resort have been on The Golf Fix, Golf Central, and Morning Drive among other shows. Also, episodes of the RE/MAX World Long Drive Championship debuted on Tuesday, Oct. 14 and air again on Oct. 21 and 28 before the live finals. If you are in Las Vegas, tickets are free to the finals. Click here to down load your free tickets. –By Brian Hurlburt

“Long driving is a hidden gem within the world of golf that brings an exciting programming complement to Golf Channel’s air and tells the stories of the golfers who live every waking hour trying to figure out how to hit the ball longer,” said Tom Knapp, senior vice president of programming, Golf Channel. “Long drive continues to grow around the world, and we’re excited to capture and showcase this sport that not only is a thrill-a-minute, but also awe-inspiring for our Golf Channel viewers.”

Over the course of three hour-long specials in October – at 10 p.m. ET on consecutive Tuesdays which began Oct. 14 – viewers will see dramatic qualifying from hopeful golfers around the world, from grassroots local and regional qualifying to championship qualifying in Mesquite, Nev. Profiles of the golfers that compete will be part of the mix, as will examinations of the science and strategies behind the long ball.

Golf Channel also will integrate the long drive theme into other programming throughout the month. Instructional programs like The Golf Fix and School of Golf will feature long-driving tips in each episode aired during the month, as well as dedicating an entire episode to hitting it farther. The shows will welcome former World Long Drive Champions to share their secrets.

The culmination of Long Drive Month will be the winner-take-all $250,000 RE/MAX World Long Drive Championship, airing under the lights and live on Golf Channel Tuesday, Nov. 4. The longest eight golfers on Earth recently were determined following three days of grueling competition. The finals will be televised live on Golf Channel from the Las Vegas Paiute Golf Resort. The finalists are (last round qualifying drive distance):

Miller won the world title in 2010 and is undefeated this summer on the Long Drivers European Tour, where he captured 12 titles. He finished as the runner-up at the 2013 RE/MAX World Long Drive Championship to Tim Burke, who hit a world-record drive of 427 yards to win the title. Burke failed to qualify for a return trip to Las Vegas. Sadlowski, who famously broke two simulators during appearances on Golf Channel, is making his eighth-straight appearance in the final – the longest active streak.

"These final eight epitomize what the RE/MAX World Long Drive Championship is about," said Sellinger. "We have three nations represented, three returning finalists from 2013, two former champions, three players with strong baseball backgrounds and a seasoned vet at 44 years old. I expect a very competitive final at the Las Vegas Paiute Golf Resort. Each of the eight has a great chance to win."

In October 2012, Long Drivers of America announced a new, three-year broadcast partnership with Golf Channel, which moved the RE/MAX WORLD LONG DRIVE CHAMPIONSHIP to the network after 17 years on ESPN. This annual world championship of long driving has taken place each year since 1975 and attracts competitors from all over the world. Participation in competitions has nearly tripled and prize money has increased five-fold. Finalists in the competition often have swing speeds of up to 150 miles per hour and can hit the ball more than 400 yards, which is more than 100 yards longer than the average PGA TOUR professional.