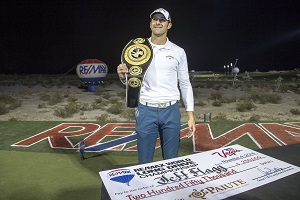 Las Vegas, Nevada (November 5, 2014)–Pete Dye's Las Vegas Paiute Golf Resort was the scene for the 2014 RE/MAX World Long Drive Championship on Tuesday night, Nov. 4, and the resort shined in the glow of the under-the-lights event. Jeff Flagg hit a final-match drive of 365 yards to beat runner-up Jeff Crittenden by just 13 inches. The event was held on the range of the resort and a special Golf Stadium was created for fans. A large crowd in the stands and in standing-room-only overflow areas watched as the Las Vegas 8 took it deep into the night sky in windy conditions. Flagg won a championship belt and $250,000 as he became the Longest Golfer on Earth for 2014. — By Brian Hurlburt.

Tied at 365 yards after their requisite six drives in the championship match, Flagg and 43-year-old Jeff Crittenden of Greensboro, N.C., waited anxiously for an exact measurement to the inch that would break the tie and determine who would be the ultimate winner. Flagg’s drive bested Crittenden by a mere 13 inches, which proved to be the shortest margin of victory in the history of the RE/MAX World Drive Championship competition.

“I thought I had him,” said Flagg, “but if there’s anything I learned from baseball is that you can’t get to high or too low until it’s a done deal.” Flagg took up long driving after a baseball career at Mississippi State University (where he was teammates with fellow Las Vegas 8 competitor Connor Powers) and with the New York Mets organization.

Speed and power were on display in front of a packed audience during the two-hour, live finale, which aired on Golf Channel from a custom-made competition set at the Las Vegas Paiute Golf Resort.  Eight finalists – the Las Vegas 8 – competed in head-to-head matches requiring all to conquer the conditions in attempts to hit drives requiring both distance and accuracy.  Of the total seven head-to-head matches, five were decided by two yards or less.

Crosswinds and crisp temperatures created a challenging environment, making it difficult for all players to hit the grid or reach the distances to which they have become accustomed.  Headlining the field of eight heading into the night were returning former champions Joe Miller of London, England, and Jamie Sadlowski of St. Paul, Alberta, Canada, who faced off early in the telecast.  The other competitors included:  Daniel Beckman, Fresno, Calif.; Matt Hanger, Anaheim, Calif.;  Connor Powers, Naperville, Ill.; and Adam Smith, Tomball, Texas.

The RE/MAX World Long Drive Championship identifies the longest golfer on earth and offers sports fans a chance to witness players who generate mammoth swing speeds of 150 mph and ball speeds of 220 mph. In comparison, the highest average swing speed on the PGA TOUR last season was 124 mph generated by Bubba Watson. His fastest swing of the year was 127 mph.  Long drive athletes train and prepare all year for the chance to take a swing at becoming the World Long Drive Champion. Specialized training allows long drive athletes to generate maximum ball and swing speeds, and focus solely on maximizing distance during competition.  The golf equipment used in Long Drive competition conforms to regulations for all golfers set forth by the United States Golf Association.

Flagg said he was humbled by the experience and hopes to be an ambassador for the sport of long drive.  He celebrated with members of his family and girlfriend who traveled to Las Vegas for the competition, and will make his first television appearance on Wednesday’s telecast of Morning Drive on Golf Channel.