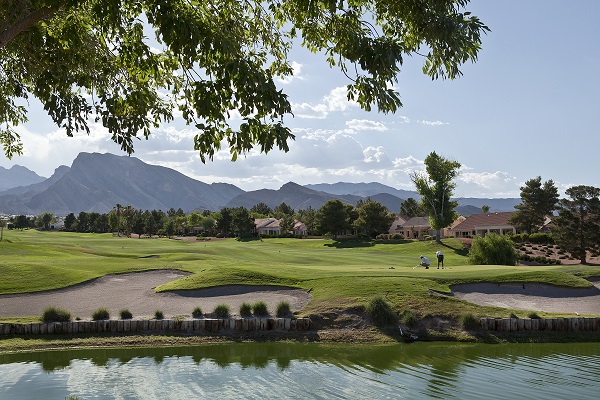 Las Vegas, Nevada (December 21, 2014)–With the year winding down, many Las Vegas junior golfers are teeing it up at two of three Las Vegas golf courses in Golf Summerlin for their final tournament rounds of the year. The Summerlin Junior Championship, a tournament on the Southwest Junior Golf Tour, is being played at Palm Valley Golf Club and Highland Falls Golf Club. Both courses were designed by esteemed architect Greg Nash and World Golf Hall of Fame member Billy Casper. –By Brian Hurlburt.

The Southwest Junior Golf Tour is operated by PGA of America member Paul Brown. This is the final event of 2014, but there are seven tournaments scheduled for 2015, including January 3-4 at Mountain Falls Golf Club in Pahrump, Nevada. Click to check out the entire 2015 junior golf schedule. Other courses that are listed on the 2015 schedule are Las Vegas Golf Club, and a mega 3-day event with round one round each at the private TPC Summerlin, DragonRidge Country Club and Southern Highlands Golf Club.

If you aren't a junior golfer, you'll want to put a round at either of these courses on your schedule. Both are fun and challeging course and feature dramatic views of the Las Vegas valley. The third course at Golf Summerlin is the executive Eagle Crest, a solid pick for a quick round of golf. Each of the courses are located in the northwest part of the Las Vegas near the Red Rock Mountains and perched above the city. The courses also offer a nice venue for a junior tournament and the staff at the courses, led by PGA of America professional Donny Long, have a long history of giving back to the community.

Paul Brown is the director of Southwest Junior Golf Tour. Paul has twenty years of direct involvement with junior golf at a variety of levels and has an outstanding reputation of administrating junior golf operations. Brown has been a member of the PGA of America since 1987. Prior to turning professional, played numerous junior events and played for Sahuaro H.S. (4 year letterman), and was a member of the University of Arizona golf team for three years.

For the last eight years, Paul has been and still is the U.S. Kids Local Tour Director in Las Vegas, offering junior golf tournaments for kids ages 6 & under to age 14 for both boys and girls.  Primarily a developmental tour, this tour offers an opportunity for parents to caddie for their junior in a tournament setting event. In the past 8 years we have had 2 U.S. Kids World Champions in their age divisions.