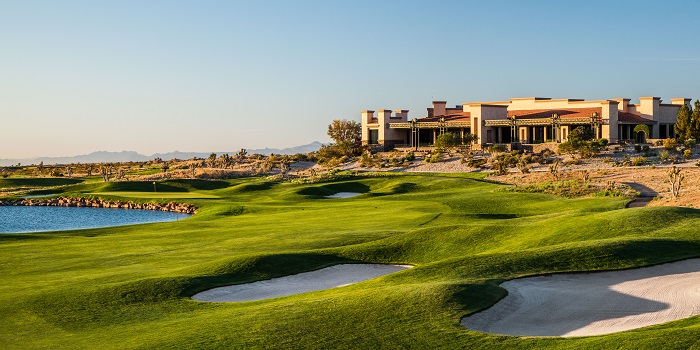 Las Vegas, Nevada (February 23, 2015)–It's hard to believe, but it has been 20 years since the legendary golf course architect Pete Dye twirled his design magic and opened his first golf course in Las Vegas. But that is the case as the Snow Mountain course at Las Vegas Paiute Golf Resort celebrates 20 years as a shining star on the Las Vegas Golf Region when it opens for play Tuesday, February 24. The Las Vegas Paiute Golf Resort is now home to the only three Pete Dye signature courses in the area, but it all started with the original, Snow Mountain. –By Brian Hurlburt.

“For 20 years, our original course, Snow Mountain, has been a favorite among many of our golfers," says Chad Gunier, General Manager. "This Pete Dye design continues to offer the challenge and experience that is unlike any other course not to mention some of the best holes on property like the Par 3, 16th or the Par 4, 18th. If you talk to a number of people, they will still say that the finishing hole on Snow Mountain is one of their favorites and most memorable. It combines the challenge and difficulty of the hole with the remarkable beauty of the surroundings that define the overall Paiute resort.  We are proud that many people still love Snow Mountain and in recent years it has received the accolades and awards that it deserves. We look forward to the next 20 years, and it is an honor to be the only resort in Las Vegas to offer signature golf courses from World Golf Hall of Fame member Pete Dye.”

In the "perfect timing" department, Snow Mountain was recently included in the top 10 Power Rankings on the popular GolfAdvisor.com website which is made up of golfer reviews. Snow Mountain came in at #9 on the list of best overall courses for the rankings that were released Feb. 17. It was also ranked #10 for best course conditions. The rankings were based on reviews posted from Feb. 2-17, 2015. Snow Mountain''s sister course, Sun Mountain, was listed #7 in the best overall courses list. Paiute was the only resort with two courses listed.

Dye has always loved what he created at the Resort. Snow Mountain was the original and followed by Sun Mountain. The Wolf course was built third, but also ranks highly in national rankings.

“The interesting aspect of the Paiute courses is that you could separate them from each other, take them onto a piece of land 100 miles away from each other, and you’d never know they were designed by the same person,” Dye once told VegasGolfer Magazine writer Roger Graves. “No two holes are alike over the course of all 54 holes, and none of the holes really resemble anything I’ve done anywhere else in the world. As far as challenges, the land wasn’t necessarily spectacular in any way, shape or form, but the long-range views of the surrounding hills and mountains were spectacular. So the challenge was to create holes with challenging shot values for different types of golfers.”

If you haven't experience Snow Mountain in the first 20 years, now is the time.