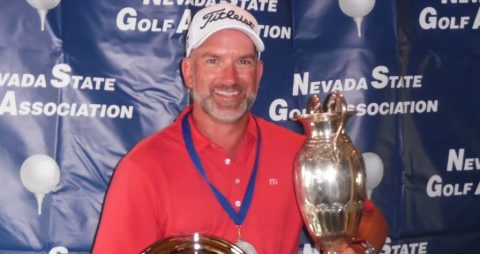 “Arturo is a good friend of mine and we’ve played a lot of golf against each other,” Buckholz said. “Whether it’s stroke play or match play we both want to win. But it’s a friendly competition.”

The tournament opened with the first of two rounds of stroke play before the field was cut down to the top eight players for the first match-play round (Friday afternoon). The four winners advanced to Saturday morning’s semi-final round setting the stage for the Buckholz vs. Estrada finale on Saturday afternoon, Aug. 27.

With the reality of five rounds of golf in about a 60-hour timeframe, endurance–as well as shot-making prowess–came into play in the tournament, Buckholz said.

In the championship match, that featured a pair of golfers representing Reno, Estrada won the second hole to go 1-up before Buckholz went on a run, winning the next four holes to quickly take a 3-up lead through six holes.

The two traded a pair of wins over the next two holes and then halved the ninth as Buckholz made the turn 3-up. He coasted to the 3-and-2 win.

“I’m pretty much done playing golf for a couple of days,” Buckholz said with a laugh. “And it was tougher because my first match (in match play) went to 24 holes. It was just a grind.”